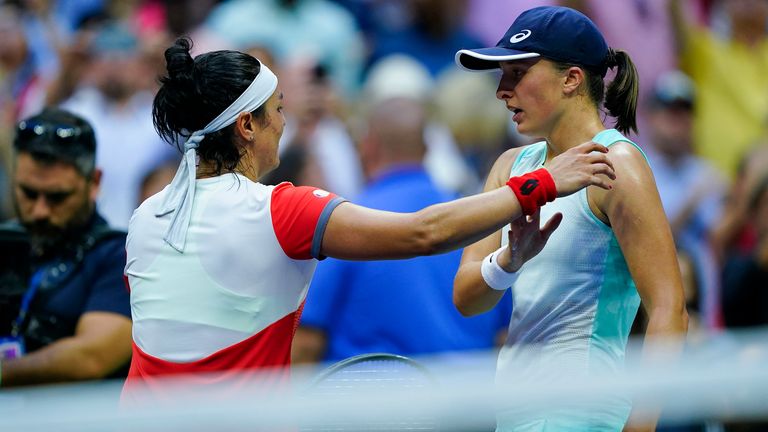 Iga Swiatek rubber-stamped her position at the top of the women’s game with a second grand slam title of the season at the US Open.

It added to her two French Open successes.

Jabeur, playing in her second consecutive slam final after losing to Elena Rybakina at Wimbledon, threatened a comeback in the second set but Swiatek held firm to clinch it in a tie-break.

Swiatek’s second victory at Roland Garros in June was part of a 37-match unbeaten run.

It is therefore fitting that, in the tournament where Serena Williams bowed out, Swiatek becomes the first woman since the American in 2014 to claim seven titles in a season.

She is a very different character to Williams and has an understated presence on court but possesses an inner belief.

This is what has now carried her to straight-sets victories in her last 10 finals.

Jabeur went into the match full of confidence after a straight-forward semi-final against Caroline Garcia and believing she had learned from her Wimbledon defeat.

Bidding to become the first African and Arab woman to win a grand slam title, Jabeur leads the tour in terms of match wins since the start of 2021.

She is now one ahead of Swiatek, and will rise to world number two on Monday.

But she had lost her only previous match this year to Swiatek 6-2 6-2 in the final in Rome in the spring and made a very nervous start on Saturday in New York.

While the top seed was swinging freely, barely missing a first serve and making every return, Jabeur was struggling with all those things.

She won only two points in the first three games.

The Tunisian steadied herself and broke Swiatek back with four clean winners.

But the tide quickly turned again.

Jabeur is at her best when she can express her vibrant personality, teasing opponents with drop shots and clever touches at the net.

But the pace and accuracy of Swiatek’s ball was keeping her pinned behind the baseline.

The drop shots she did try felt like desperate moves and mostly landed in the net, while her serve, which has been a strong weapon this fortnight, was not working either.

Remarkably, Swiatek breaks serve in more than half of the return games she plays and Jabeur’s frustration increased as the Pole moved ahead at the start of the second set.

It appeared little more than a glimmer of hope when Jabeur saved break-points at 3-0.

But, with Swiatek seemingly unsettled by repeated shouts from the crowd, the Pole’s level began to drop and Jabeur fought back to level at 4-4.

And, had she taken any of the three break-points she created in the next game, the contest might well have gone to a decider.

But Swiatek held on and, in spite of missing a match-point at 5-6, converted her second chance in the tie-break.

After Jabeur’s final shot flew long, Swiatek collapsed to the ground and was in tears as she celebrated with her team.

“I’m just not expecting a lot, especially before this tournament. It was such a challenging time. Coming back after winning a grand slam is always tricky,” Swiatek said.

“For sure this tournament was really challenging. It’s New York, it’s so loud, so crazy. I’m so proud that I could handle it mentally.”

Turning to Jabeur, the Pole said: “I know this is already a pretty nice rivalry. I’m pretty sure we’re going to have many more and that you’re going to win some of them. So, don’t worry.”

A rueful-looking Jabeur said: “I want to thank the crowd for cheering me up. I really tried, but Iga didn’t make it easy for me. She deserved to win today. I don’t like her very much right now, but it’s OK.

“An amazing two weeks, backing up my final in Wimbledon. I’m going to keep working hard and we’ll get that title sometime soon.

“I try to push myself to do more. Hopefully I can inspire more and more generations. This is just the beginning of so many things.”