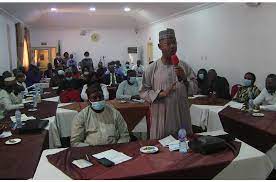 The Organic Fertilizer Producers and Suppliers Association of Nigeria (OFPSAN) has called for the disbandment of the Presidential Fertiliser Initiative (PFI), saying it hasn’t met up to expectations of engagement.

Mr Noel Keyen, the National Chairman of OFPSAN, made the call on Tuesday during an online presentation on the topic “Presidential Fertilizer Initiative 2017-2021: The unanswered questions”, organised by Journalists Go Organic Initiative.

Keyen said that the PFI had failed and should be largely replaced with a more viable and sustainable organic option, globally accepted with several all-round advantages.

The initial processes of PFI, led by Gov. Abubakar Badaru of Jigawa, has obviously been hijacked by middlemen, reducing NAIC’s role to importation of raw materials, storage and wholesale of raw materials to blenders.

“The initial idea of PFI was to eliminate the huge fertiliser subsidy burden on the Federal Government, create thousands of direct and indirect jobs and alleviate the plight of domestic farmers by ensuring availability of fertilizers.

“Would Nigerians say that any of the listed objectives have been achieved? “

“It is clear that the incentives approved by Mr President for the PFI and its Nigerian Co-operators from inception and later modified, is a reflection that President Buhari means well for the Agriculture sector; the fact that we faulted his exemption of the organic fertilizers sub-sector is the problem now.”

He stressed that there were many unanswered questions that the presidency needed to address concerning the PFI headed by Gov. Badaru.

“Why is it that in phase 1 of PFI operations, prices of fertilizer crashed from N10,000 to N5,500? Is it in any way linked with when NAIC was paying FEPSAN members a blending fee while raw materials were subsidized for them to lift , process, sell and pay later through NAIC?

“Has it been made clear to all Nigerians if the funds taken from our commonwealth, domiciled with NSIA and CBN utilised in the entire PFI programme, have been repaid fully by the blenders through NAIC or Fed. Ministry of Finance or even CBN?

“If 30 million bags of fertilizers were produced within 3 years and blending plants grew from 7 to 44 as at May 2021, what are the growth statistics of both factors in the last average of 1 year? Why has the price gone up astronomically to between N20,000 and N25,000 per a 50kg bag?

“What really informed the phase 2 restructuring of the PFI, with the NSIA taking the frontal role of importation of raw materials, storage and wholesale supply to FEPSAN blenders which is totally the opposite of phase one, ” he said.

He asked why NAIC-NPK limited, created in 2016 by NAIC for the PFI operations, spun off in may 2021 to the Federal Ministry of Finance?

“Does it have anything to do with its inability to recover outstanding debts from blenders for phase one?

“Why is the status of NAIC NPK Ltd totally unknown in the phase two restructuring and has remained so to date?

“If by 2021, 44 blending plants were functional Nationwide and the NSIA became fully in charge of importation, storage and wholesale of raw materials, why are the blenders not producing enough now?”

Also, ” why are they not distributing the products to be made available and affordable everywhere, even below the much applauded N5,500 per bag?

The Chairman also wondered at the numerous blenders forthcoming with their bank guarantees to collect raw materials from NSIA.

“Why is the National Assembly leadership and the committees on agriculture and rural development in both chambers not interested in the oversight for such recoveries if any?

He said there were no success stories of the PFI, hence, the call for disbandment and a need to have a new scientific approach, organically.

“I wonder if the major actors in the PFI are aware that our collective National Food Security is seriously under threat and that Nigeria doesn’t require selling the same failed old PFI story to Mr.President for a phase three

“OFPSAN objects to it in it’s entirety because PFI has failed the entire agriculture sector of Nigeria.”

Keyen, however, said that OFPSAN was making calculated efforts to reduce the nation’s over-dependence on chemical inputs in the Agricultural food chain practices through the use of harmless chemical inputs.

He said such toxins would ultimately harm the physical, chemical and biological properties of our soils, foods, environment and societal health.

Kenyen said the members had a large stock of organic fertilizers that could largely fill the current void in the fertilizer market but required the intervention of all arms of government.