According to the CPS, the notice of the appointment is contained in a letter signed by Isa Pantami, Minister of Communication and Digital Economy. 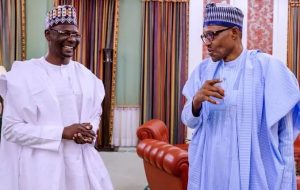 President Muhammadu Buhari has appointed Gov. Abdullahi Sule of Nasarawa State as a member of the Presidential Council on Digital Economy and E-government.
This is contained in a statement by Ibrahim Addra, Chief Press Secretary (CPS) to the Governor and made available to newsmen on Tuesday in Lafia.
According to the CPS, the notice of the appointment is contained in a letter signed by Isa Pantami, Minister of Communication and Digital Economy.
READ ALSO:https://brandpowerng.com/fg-activates-passport-tracking-system/
Don't miss
NEWS

Chief Press Secretary explained that the letter indicated the council was part of effort to implement the National Digital Economy Policy (NDEPS) and the Nigerian E-government Master Plan (NEGMP)
The CPS added that the minister described Nasarawa State as critical to the success of Nigeria’s Digital Economy Agenda.
Gov. Abdullahi Sule and other members of the council are to be inaugurated by the President on a date to be communicated.
(NAN)