“One of the challenges of the NIS in recent past is in the issuance of the Nigerian passport. I am however, happy that we have overcome this and have now put in place a seamless passport administration system. 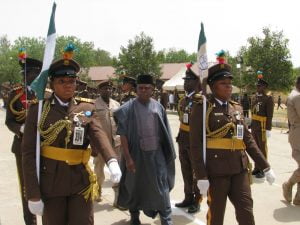 The Federal Government has activated a passport tracking system that allows applicants to monitor and know the status of their application online.

The Minister of Interior, Rauf- Aregbesola, said this during the passing out parade of the 47th Basic Superintendent Course, 2021/2022 at Nigerian Immigration Service training school, Kano on Tuesday.

“One of the challenges of the NIS in recent past is in the issuance of the Nigerian passport. I am however, happy that we have overcome this and have now put in place a seamless passport administration system.

“We have also activated a tracking system that allows applicants to monitor and know the status of their application online,” he explained.

Represented by Commissioner, Civil Defense, Customs, Fire Service and Immigration Board, Emmanuel Bassey said before the end of the year, the service would have a fully digital application system that would remove any stress in the process.

“Let me reiterate my appeal to Nigerians to follow laid down regulations on passport application by going through the NIS online portal.

“Those who go through touts and unscrupulous NIS officials are undermining our effort to eliminate corruption and institute a stress-free application system.

“It is therefore, your patriotic duty to go through the official channel and avoid any practice that subverts the due process,” he noted.

The minister said that their engagement into the Nigeria Immigration Service reaffirmed government’s commitment to strengthening internal security of which our borders were an integral part of.

According to him, without secure borders, no security measure can work, external criminally minded persons can infiltrate the country and escape at will, if the borders are not well secured.

He said that diseases spread also from one country to the other through cross border movements.

Aregbesola urged the personnel to put the training and indoctrination to use in manning the boarder.

“You need to know what the organisation you have joined, the NIS, is all about.

As you have been taught, your main mission is to man the nation’s borders,” he added

He lauded President Muhammadu Buhari for his support to the ministry and by extension the Nigeria Immigration Service.

The minister also commended the Acting Controller General of the NIS for his professionalism, diligence, patriotism and the sterling way he had handled the affairs of the Service since his assumption of duty.

Earlier, the acting Comptroller General of the service, Idris Jere, advised the officers to always be guided by the rules governing the operations of the Service premised on honesty and professionalism.

Jere thanked the Minister of Interior and the Federal Government for the continuous support accorded the Service in its operations and manpower development activities.

Speaking also, the Commandant of the School, Comptroller Ado Rano, stated that the 548 cadets were taken through modern Border Security and Migration Management trainings, including physical drills to make them fit for the tasks ahead.

He stressed that members of the directing staff of the school demonstrated uncommon commitment during the course and thanked the CGI for the opportunity.

NAN reports that heads of security agencies, traditional rulers and members of the public graced the occasion.