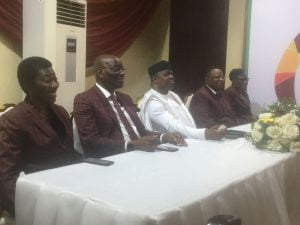 Dr Lanre Teujoso, Pro-Chancellor, University of Lagos, has called on friends of the institution and other stakeholders to support teaching, research and scholarship, through its $500 million endowment scheme.
Tejuoso, a lawmaker and also Chairman of Council of the university, stated this at a ceremony to commemorate the 60th anniversary of the Institution, established in 1962.
The theme of the ceremony is: University of Lagos; Celebrating 60 Years of Excellence in Education,  Eyes on the Future.
He said that such investment was needed to improve on the faculties, departments and centres as well as the  “P3P Initiative” (Pick a Project,  Pick a Programme and Pick a Person).
According to the pro-chancellor, higher education is incremental and self-perpetuating, because knowledge is ever-changing, mirroring the evolution of the human society and proving to be pivotal to its continued existence.
“Despite the current prevailing circumstances affecting tertiary education in Nigeria, we want to  kindly call to friends and other stakeholders of this great institution to endow funds to support teaching, research and scholarship.
“We also seek such commitment in faculties, departments and centers, through the university’s $500 million endowment scheme and P3P initiative (“Pick a Project, “Pick a Programme and “Pick a Person).
“As we revel in this moment of the diamond jubilee of our university, I urge you all to look closely at this facility where we are currently seated, and to cast your minds back to this exact day, sixty years ago, when the first set of students received lectures at this location.
“As you do that, I quickly call your attention to two instructive points that must have surfaced on your mind;  first, the recurring and self-perpetuating nature of higher education and second, the importance of infrastructure to the delivery of quality education.
“From the handful of pioneer students who sat at the first lecture in 1962, to the over 50,000 undergraduate and postgraduate students currently in the university, the provision of adequate infrastructure, could not be over-emphasised,” he said.

Tejuoso said the quality with which the current staff (teaching and non-teaching) deliver on their mandate in the face of such challenges had been amazing.
He said that so also was the commitment of the leadership never to rest on its laurels, in the face of the challenges
“The excellence with which our alumni operate in their different fields of endeavour give me the assurance that 40 years from now, UNILAG will remain the destination of choice, for the millions of people who seek knowledge for the purposes of personal and national development,” he stated.

According to him, for the institution to be able to continue her obligation to the increasing number of those seeking knowledge there is an absolute need for quality and quantity of supporting infrastructure.

“To this end, I implore you to partner with the university in an effort to increase its infrastructure base, through the provision of new classrooms and lecture theatres.

“This is essential, just as the existing ones need to be maintained. There should also be  hostel accommodations, office spaces, laboratories and workshops.

“Expansion of research capacity, as well as increasing the bandwidth of internet connectivity are some of the capital investments that our dear university still needs to consolidate her position as a top institution of higher learning in Africa and the world,” he said.

The Council chairman beckoned on more alumni of the institution to always seek to look back in a bid to contribute their quota to the development of their alma mater.

According to him, there is need for people to always look back and see where they are coming from.

“We want them to come back home and contribute to the development of the institution, to be what it was when were here, as well as surpass all other universities they met when they travelled across the globe.
“Fortunately, the world is a global village, we don’t need to be physically present to contribute to such development. You can do that online.
“COVID has taught us that we can survive without being physically present. So we just want them to have a passion for their past, passion for their alma mater, as they join us to reminisce, reconnect and recalibrate in efforts to advance the vision of the founding fathers of UNILAG,” he said.
Tejuoso commended the efforts of the numerous individuals and  corporate organisations toward the continued development of the university.
He said that the evidence of their gestures dotted the campuses, while pleading for more.
In his address, the Vice Chancellor of the university, Prof. Oluwatoyin Ogundipe, said there was the need for universities to rise above the orthodox system of education, by embracing the ‘universities without borders’ mode.
He explained that this mode  of teaching and learning is a situation whereby  the curriculum that was being run in Havard University in the U.S. for instance, could also be run in the university of Lagos, as well as Cambridge in the U.K.
“What is going to happen is that the courses that we take in Harvard, here in university of Lagos, we can be credited for it. And that is the meaning of university without border.
“Having said this, however,  I want to state that this will require high tech software and gadgets and innovation in the university.
“This is because if you look at it critically, the way things are going now, universities are moving out of orthodox life, into being innovative, creative as well as looking into the future, so as to make them to be relevant.
“And our students now, with what they are doing, it is fantastic,” Ogundipe, the 12th vice chancellor whose tenure draws to a close in November stated.
He urged his successor to strive hard to ensure that this dream was realised.
Speaking further, the vice chancellor noted that the university, under his watch, had done well in the area of research grants and research.
“The university is known for its prowess in research and one can remember names such as Prof. Ayodele Awojobi, who developed the Autonov 1 and others.
“In the last couple of years, we have taken steps to become a research-intensive university and that has led to many of our academic and non academic staff winning research grants to the tune of N17 billion,” he stated.
He also noted that management had continued to develop new partnership with local and international entities to improve opportunities for both staff and students.
The VC said they were also leveraging the partnerships to build global recognition.
Ogundipe lauded some friends of the university for the support they showed the institution, through cash donations and infrastructure.
He sympathised with the students who had been away from school for over seven months, following the ongoing lecturers’ strike.
The vice chancellor expressed optimism that the issues would soon be sorted out and life would return to normal on campus.
Giving further insight into his administration, Ogundipe noted that the peace enjoyed  in the university in the past five years, had  been a great source of joy to him.
“In the last five years, there has been no students’ unrest, no local strike by union, we have indeed enjoyed peace in the past five years and with that peace, we have been able to make  a lot of progress. So this means a lot to me,” he stated.
He urged his successor to look unto God, the author and finisher of every man’s faith.
“He is the only one that can do it for him and I know God will definitely raise men that will assist the him, just like Caleb and Aaron,” he stated.
Prof. Olajide Abass, a former Dean of the Faculty of Science and a former student of the institution congratulated the entire members of management, staff and students, for the mileage.
He noted that the institution would only get better.
According to him, output of students and research in knowledge is what makes any university what it should be.
Prof. Olakunle Iyanda, a pioneer student and also a former Dean of the Department of Business Administration also lauded the university for the feats it had attained.
He supported the vice chancellor’s call for universities without border, stating that it was the way forward