Carro said clubs must also play their part to give DFL chairman Donata Hopfen good arguments to get more money from foreign broadcasters. 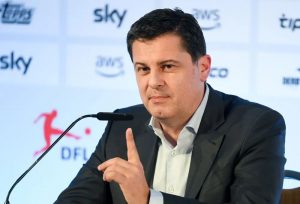 “We urgently and significantly have to increase the proceeds, which are currently languishing at less than 200 million euros (215 million dollars), if we want to continue to be among the big leagues in Europe,” Carro said.

Carro said clubs must also play their part to give DFL chairman Donata Hopfen good arguments to get more money from foreign broadcasters.

German league income is far behind what the English Premier League and others generate abroad.

“This includes more excitement in the league, success in European competitions and all clubs trying to have a presence in important international markets in order to make the league more visible and strengthen it,” he said.

Carro said Bayer Leverkusen’s trip to Mexico last week was such a contribution, and that they are planning another trip abroad in autumn.

He expressed hope that Bayern Munich’s run of 10 Bundesliga titles in a row would soon be broken.

Carro is also hopeful that Bayer Leverkusen, third-place finishers in the past campaign, would hopefully be among the challengers.

“Someone will eventually succeed in breaking Bayern Munich’s streak. I hope it will happen as soon as possible. And I hope it will be us. We are working hard for that,” the CEO said.