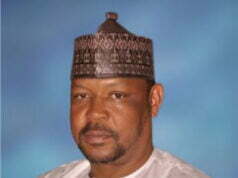 President Muhammadu Buhari has appointed Mr Salihu  Dembos as the Director-General/Chief Executive Officer of the Nigerian Television Authority (NTA).
The Minister of Information and Culture, Alhaji Lai Mohammed, announced the appointment in a statement in Abuja on Wednesday.
In the statement signed by Mr Segun Adeyemi, the minister said the appointment is for a tenure of three years in the first instance.
Adeyemi is a Special Assistant to the President (Media) Office of the Minister of Information and Culture
As contained in the statement, “until his appointment,  Dembos was the Executive Director, Marketing, of the NTA.
“Dembos’ career as a media professional spans over 20 years.
“He has served as General Manager of two NTA Stations, in Lokoja and Kano; and as Zonal Director,  NTA, Kaduna, among other appointments”.
Sign in
Welcome! Log into your account
Forgot your password? Get help
Password recovery
Recover your password
A password will be e-mailed to you.