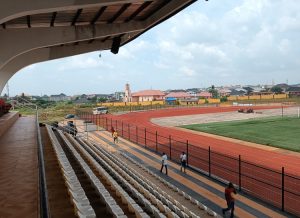 The dimension errors at the Awka Stadium’s ultramodern athletics tracks can be corrected, the contractor has assured.

Ebi Egbe, Managing Director of Monimichelle Construction Limited, a leading sports facility builder, said this while reacting to the observed error in the size of the tracks on Tuesday.

The News Agency of Nigeria (NAN) reports that Mr Patrick Onyedum, the Chairman of Anambra Sports Development Commission (ASDC), had expressed worry over the inadequacy of the tracks for major athletics competition after an assessment visit to the stadium.

Onyedum also called for a meeting between the Commission and Monimichelle over execution of the contract under the last administration and possible way forward.

Egbe said his company worked on the existing sub structure which was essentially prepared for the football pitch.

According to him, this was realised deep in the pitch construction and asphalting of the substructure concrete and it was difficult to stop at that point.

“We had to continue laying the track because the materials were already exposed to the sun for almost a year due to delays beyond our control.

“However, it can be corrected, the reduction of the extra metres by correcting the circle can be done, as we intend to add more facilities on the D section of the track,” he said.

Egbe said the solution would be to close some of the football pitch drains completely and that the correction would not affect the dimensions of the pitch.

He said the track itself was a full Polyurethane track that had been properly layered and would not need to be tampered with but needed the right curve dimensions and lining to meet IAAF standard.

“This is doable with ease, ” he said.

The contractor said he would be in Anambra for the meeting with the Sports Commission Chairman.