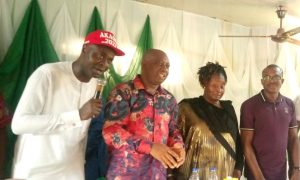 No fewer than 43 Anambra farmers drawn from Anambra East and West Federal Constituency who underwent dry season training in Egypt would receive N1 million grant each for take off.

APU is an association of youth intelligentsia from Enugu-Otu, Mkpunando and Eziagulu-Otu all in Aguleri Town of Anambra East LGA.

Obidigwe said the beneficiaries were selected from across the communities in the constituency to undergo training on dry season farming techniques in Egypt.

He said Anambra East and Anambra West LGAs were richly endowed with water resources and that the grants was to ensure all year round food production, increase output and liberate more families from poverty.

“Having been empowered with the knowledge, the 43 farmers are going to get one million Naira each with which they will start dry season farming this year,” he said.

Obidigwe said he felt challenged by the Aguowulu group’s endorsement and that the task of his reelection was a collective one while promising that he would not relent in his determination to give the people quality representation.

In their resolution for adopting Obidigwe as their preferred candidate for Anambra East and Anambra West Federal Constituency in 2023, APU said he had surpassed the performances of every previous representative from the constituency.

The resolution which was read by Mr Oluchukwu Udemezue Esq, said Obidigwe had trained no fewer than 500 youths and women on skills, distributed about N100 million to nine secondary schools and gave free education to students of Col. Mike Atta secondary school.

The group said all the communities in the constituency had benefited from physical project and empowerment intervention of Obidigwe who also held regular town hall meetings with the people, adding that he waay the most qualified among all those contesting for the seat.

Seconding the motion, Mr Julius Chukwuemeka, Commissioner for Power and Water Resources in Anambra, said Obidigwe had demonstrated through his people driven representation that he understood the existential challenges of the people of the constituency.

Chukwuemeka who is also the General Secretary of APU, said the Lawmaker had impacted positively on infrastructure and capacity building and that it was only rational to support him to do more.

Mr Emmanuel Okoye, National President of APU, said the association would continue to support education development of the youth of the area while thanking Obidigwe for his Education Trust Fund.

Okiye said with the help of the Trust Fund, APU was paying school fees for students from primary to tertiary institution, noting that it would embark on distribution of exercise books and writing materials to all schools in Anambra West LGA.