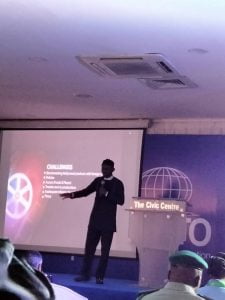 Okechukwu Ogunjiofor, a pioneer in Nollywood, and Producer of the movie “Living in Bondage”, on Wednesday said that access to funds had been an age-long challenge for all filmmakers in the country.
Ogunjiofor disclosed this during one of the sessions of a three-day United Nations World Tourism Organisation (UNWTO) Conference, tagged “A Day with Nollywood”, held at Victoria Island, Lagos.
Ogunjiofor, who spoke on “The Four epochs of Nollywood: The Prospects, The Challenges”, recounted the challenges he experienced during the production of ‘Living in Bondage’ in 1992.
According to him, the movie was delayed for four years due to some financial constraints.
“I can remember when I wanted to produce Living in Bondage, I was financially stranded for four years, I stayed on the streets between 1988 and 1992.
“I didn’t have a rich father nor uncle, film was not a rich business then, I needed just N150,000, banks were not interested and I decided to take to the street.
“It was a horrible experience and this movie has set the pace for Nollywood growth over the years,” he said.
Ogunjiofor noted that he experienced similar situation when he tried to produce “Amina” in 1999 but could only do that in 2021.
He said “Amina” was rated first Nigerian film to make top 10 films globally by Netflix.
He commended the efforts of Dr Ngozi Okonjo-Iweala, a former Minister of Finance who rebased the Nigerian economy.
He said Okonjo-Iweala made the financial institutions know that Nollywood valuation was over one billion dollars, which resulted in banks giving out loans to filmmakers.
According to him, Nigerian banks started giving out loans to filmmakers who had viable scripts without collaterals, as the banks created Nollywood desks to attend to filmmakers.
“This was the first time in my life the creative industry took ownership of the industry, highly commendable,” he said.
The filmmaker said going forward, the Federal Government must work on creating viable platforms that film producers could access funds through grants.
“Financial institutions should be educated that filmmaking with intellectual property that has gestational period as profit making is not immediate.
“We need more access to funds and places to exhibit, where we can tell Nigerian stories to open Nigeria to the world.
“We should minimise restriction on using certain places to shoot our films,” he said.
Editor’s Picks  Nigerian artiste, Victony releases Spotify’s reimagined version of Davido’s “Dami Duro”