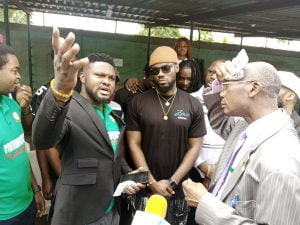 The  group, which arrived at the INEC office at Sabo-Yaba around noon, complained that the ongoing political group, Youths In Politics (YIP)was taking a lot to time from applicants at various local government areas of the state due to long queues.

Addressing newsmen, the President/Convener of the group, Mr Micheal Nwabufo said  the exercise was strenuous and time consuming in most areas, hence the need for the electoral umpire to ease the process by taking the machines closer to the people.

“We are here to ask for more voter enrollment machines in the state. So many youths who want to register are discouraged because the process is time consuming. This is why many are not turning up.

“Youths don’t have time to waste, so INEC must allocate more machines to Lagos state  to ease the process at various local government.areas.  Infact, INEC should put a machine each in the 245 wards in the state.

“The current number of machines in the state cannot cope with the density in some areas. Some areas need additional mobile registration centres.

“The exercise is taking too much time and days. We have long queues in some areas like Lagos Island, Oshodi Isolo, Alimosho, Eti-Osa and so on,” Nwabufor said.

The convener said  the group was ready to volunteer in anyway to assist INEC in organising and mobilising youths to register if the commission provided more machines.

According to him, one of the leaders of group recently picked number 1000 while trying to register at Ajao Estate in Oshodi-Isolo local government area  and on the second day, the same applicant picked number 700.

Nwabufo said: “We have gone round and we are not satisfied with the number of machines we saw.

“Sometimes, if you go to INEC office in a local government area, you will see only two machines, and you see over 1000 people seeking to register. It doesn’t make sense.

“There isn’t enough machines. We are not pleased. INEC should take necessary steps to make sure that people get registered and get PVCs.”

According to him, the group has about 1.6 million  membership to help INEC in pushing out information and mobilising if machines are available.

Also speaking, Mr  Nelson Enwerem, one of the National Executive officers  of the group, advised INEC to adequately publicise the timetable for the rotation of enrollment machines in each of the local government areas  to help the people.

“We need the youth to get their PVCs because the next election in 2023 is very important for the growth of this country, where we are is not where we ought to be,” Enwerem said.

Responding, Mr Olusegun Agbaje, the INEC Resident Electoral Commissioner in Lagos State said the state  had the highest number of enrollment machines in the country.

“We have about 170 machines in the entire Lagos state. So, we have sufficient machines to capture people that are ready to get captured. The machines we have in Lagos is the largest we have in Nigeria.

“We will continue to do what we can do to ensure that we are able to register as many Nigerians as possible before the end of the exercise,” Agbaje said.

The INEC boss, who noted that the crowd had reduced because of extension, explained that the youth group were also surprised to get to INEC headquarters office and see empty seats.

“I am sure people will start rushing again if the commission put deadline at the end of July.

“We are ready to do the work and we want them to come so that we can finish the registration as early as possible.”

The News Agency of Nigeria (NAN) reports that Agbaje obliged all the youth leaders opportunity to register at the INEC office before they left.