The governor expressed happiness in lending his voice with the global community to mark the 50th anniversary of the WED. 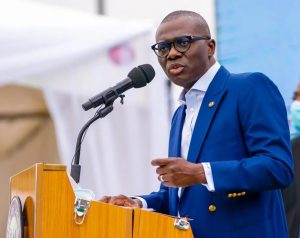 Gov. Babajide Sanwo-Olu of Lagos State has urged Lagos residents to think of the environment first in every action taken.

Sanwo-Olu made the call on Sunday in Lagos at an event to mark the 2022 World Environment Day(WED).

The News Agency of Nigeria (NAN) reports that the theme of the 2022 WED was “Only One Earth.”

“Let us all do more to make the world a cleaner and healthier place,” Sanwo-Olu said.

The governor expressed happiness in lending his voice with the global community to mark the 50th anniversary of the WED.

He said that the United Nations was conscious of the major role played by environmental sustainability.

He said that sustainability played very key role in the well being of people and their economic dependence.

According to him, the considerations led to setting aside June 5 to stimulate environmental actions for a better world.

“The commemoration of the day is a global platform for inspiring positive change with over 150 countries participating to raise awareness and stimulate environmental actions.

He reacalled that the first ever celebration 50 years ago stimulated a collective action to protect the environment.

” It was also there that the goals of poverty alleviation and environmental protection became linked, paving the way for Sustainable Development Goals.

“It is fascinating to mention that Only one Earth was the slogan for the 1972 Stockholm conference,” Sanwo-Olu said.

Sanwo-Olu said that the 2022 celebration was a clarion call to celebrate the planet through collective environmental actions.

“There is urgent need to focus on the need to live sustainably with nature and possibilities for shifting to a greener lifestyle through both policies and individual choices for the benefit of mankind.

“Sustainability and protection of the environment are without a doubt among the most pressing issues in the world today,.

“Such as climate change, loss of biodiversity and environmental pollution.
“The impact of these challenges have negatively made the achievement of SDGs less successful,” Sanwo-Olu said.

. He said that human lifestyle and green house emmissions were a major cause of climate change.

Sanwo-Olu said that our planet’s ecosystem was currently suffering a staggering rate of dramatic environmental change.

He said that the change was precipitated by increasing negative effects on human population growth and associated pollution problems.

“Global Environmental pollution has altered the the earth natural system, and is becoming an increasing concern for well being and survival of many species.

“Time is running out and nature is in emergency mode, without action, actual exposure to air pollution beyond safe guidelines will increase by 50 per cent.

“Within the decade, climate is heating up to too quickly for people to survive and adapt to nature,” Sanwo-Olu said.

The governor said that no matter our economic status, we can still be a part of Lagos State Development Agenda by getting involved.

” It is also an opportunity for us to think about nature, which offers us to supply, shelter, and eco system restoration.

“We must admit the achievement of Lagos state governments in bringing about restoration of indigenous trees project towards curbing Climate change effects and its effort to end open defecation by 2025.

He commended the contributions of corporate organisations, non governmental organizations, traditional groups, religious groups and other notable bodies that have consistently been involved in making our environments a better or more conducive place.

The governor also expressed gratitude to the management and staff of the Ministry of Environment and Water Resources for ensuring that persistence drive of the state’s policy toward interesting legacy of greening and restoration of indigenous trees to the citizen is sustained.

According  to him, it is collective action that will create the transformative environment we need so we can advance to a more sustainable and just earth where everyone can flourish.