The Pope said there was need for people to listen to the views of others in dialogue to end frictions that cause human carnage. 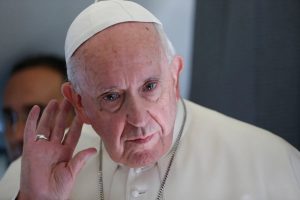 The Catholic Pontiac, Pope Francis, on Sunday admonished people to listen to other people’s views at all times to halt crisis.

The Pope gave the advice in his message to mark the 2022 World Communications Day with the theme “Listening with the Ear of the Heart”,

He summarised the theme as “Come and See”, saying it was apt in order to discover reality and be able to recount its beginning while experiencing events and meeting people.

The Pope said there was need for people to listen to the views of others in dialogue to end frictions that cause human carnage.

The News Agency of Nigeria (NAN) reports that the Catholic Church uses the occasion of World Communication Day to  arouse the consciousness of media practicitioners to their obligations to the well-being of the society.

It was instituted in 1967 by Pope John Paul ll for proper reportage of the society and to encourage practicitioners to be society friendly in their obligations.

NAN also reports that the content of the Pope’s message was relayed to the faithful by the Lagos Catholic Archbishop, His Grace Adewale Martins,  at the Holy Cross Cathedral, Lagos.

In the message, the Pope decried the universal upheavals that had prevented people from worshipping God in its through sense.

He said: “I would now like to draw attention to another word , “listen”, which is decisive in the grammar of communication and  a condition for genuine dialogue.

“In fact, we are losing the ability to listen to those in front of us, both in the normal course of everyday relationships and when debating the most important issues of civil life.

“At the same time, listening is undergoing an important new development in the field of communication and information through the various podcasts and audio messages available that serve to confirm that listening is still essential in human communication.”

He said; :A respected doctor, accustomed to treating the wounds of the soul, was once asked what the greatest need of human beings is.

“He replied: ‘The boundless desire to be heard”.

“A desire that often remains hidden, but that challenges anyone who is called upon to be an educator or formator, or who otherwise performs a communicative role: parents and teachers, pastors and pastoral workers, communication professionals and others who carry out social or political service.

“Listening with the ear of the heart,”

“From the pages of Scriptures we learn that listening means not only the perception of sound, but is essentially linked to the dialogical relationship between God and humanity.

“The initiative, in fact, is God’s, who speaks to us, and to whom we respond by listening to him.

“In the end, even this listening comes from his grace, as is the case with the newborn child who responds to the gaze and the voice of his or her mother and father,”

Adewale-Martins encouraged people, starting from the family unit to the larger society, to embrace the culture of hearing and listening to the other side of the view to halt subsisting troubles in the world.

He described hearing as different from listening, said that listening unlike hearing was accomplished with the persons ability to reach an accord with the other person.

He added that among the five senses, the one favoured by God seems to be hearing.

“Perhaps because it is less invasive, more discreet than sight, and therefore leaves the human being more free.”

In his message at the Cathedral, the Archbishop of the Lagos Metropolitan Sea, Martins encouraged Nigerians to live in peace with one another through functional communications.

The Church leader whose 63rd birthday comes up on Wednesday, said that, communication was essential in facilitating bonds and forestalls frictions capable of causing problems in society.

He called for a dailogue between different religious and ethnic nationalities in the country to aid in bringing an end to human induced crisis in the society.

During the Mass, the Church prayed for  newsmen, their work tools and their relentless efforts to make the society better.