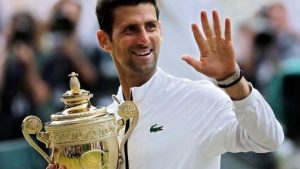 Serbia’s Novak Djokovic claimed the men’s title at Wimbledon on Sunday but a day later tumbled four places to seventh in the world rankings —- his lowest placing in four years.

The rankings were published by the governing Association of Tennis Professionals (ATP), who removed points from Wimbledon.

The action was due to the All England Club’s decision to ban Russian and Belarusian players following the invasion of Ukraine.

Russian Medvedev was one of those banned from Wimbledon but he remains top of the rankings going into the North American hard-court season.

Meanwhile Swiss great Roger Federer, who has not played due to injury since Wimbledon last year, fell out of the rankings completely.