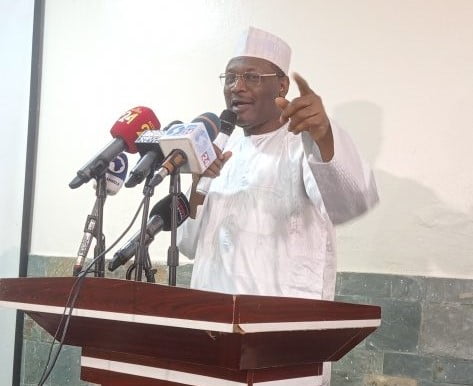 The Independent National Electoral Commission (INEC) on Friday gave an insight into why much funds went into the conduct of elections.

Prof. Mahmood Yakubu, the INEC Chairman, gave the insight while responding to questions at an interactive session with the Nigerian Guild of Editors (NGE) tagged ‘The Editors’ Forum’ in Lagos.

According to him, cost of logistics, highly-secured ballot papers, allowances for personnel, among other reasons, are responsible for the huge funds used in conducting elections in Nigeria.

“But here in Nigeria, we print ballots papers in currency quality and we entrust them to the Central Bank of Nigeria.

“The ballot papers will now be moved with all the protocols and security according to the movement of the national currency, just to protect the process.

“This is not going to be done cheaply. So, we pay for lack of trust in the system,” the INEC boss said.

Yakubu, however, said that Nigeria’s elections were not the most expensive, if the entire cost was spread per head of the voting population, projected to be about 95 million.

He said that the last elections conducted in Ghana, Kenya and Guinea-Bissau were more expensive, if the voters’ population was considered per capita in relation to the cost.

“The cost in Nigeria, I think, is nine dollars per head (N4, 500) as against what happens in other countries. Ours is not even the most expensive.

“The cost of elections in Nigeria in 2023 is N305 billion of the national budget of over N17 trillion.

“The cost of elections is just 1.8 percent, not even up to two percent of the national budget.

“If we remove the technology cost, 60 percent of the cost of elections in Nigeria is spent on logistics and personnel allowances,” he said.

According to him, the commission will engage no fewer than 1.4 million Nigerians for national and state elections as ad hoc staff who will have to be paid and transported to their various locations.

“I am sure as we continue to build trust and confidence in the process, the cost of elections will come down considerably,” Yakubu said.

On electronic voting, Yakubu said that the country was getting closer to achieving it, noting that it involved several processes.

On vote buying, the INEC boss said that fighting the menace required the involvement of all stakeholders.

He said that the commission had taken some steps to stem the tide and make it difficult.

Yakubu reiterated that the commission was committed to electoral justice, reassuring  Nigerians that rigging had been made difficult and impossible ahead of the 2023 elections.

Yakubu said that the commission had started cleaning up of voters register, noting that credible elections start with a credible register of voters.

The INEC chairman said that the commission was committed to improving on its delivery of elections.

“An election cannot be better than the environment in which it is conducted, which includes the security situation, social, economic, political culture, and national infrastructure among others.

“It is simply amazing the way INEC officials get to some villages to conduct elections. Our elections cannot be better than the quality of our infrastructure,” he said.

Yakubu said that there were about 161 days to the 2023 general elections, adding that Nigeria could make it work because the commission was committed to electoral justice.

“We have introduced reforms that we believe have taken us out of Egypt and we will never go back,” he said.

While stressing that INEC does not support media censorship, Yakubu called for balanced reporting.

He said that the antidote to fake news was “greater openness and transparency”, which INEC was committed to.

Earlier in his welcome address, Mr Mustapha Isah, the President of NGE, said that Nigerian journalists should be genuinely interested in deepening the democratic space.

Isah said that they played a key role in the fight for the restoration of democracy in Nigeria.

He said that it had become imperative for editors to thoroughly interrogate players in the democratic landscape.

He listed some of these as political actors, candidates vying for elective positions, the electoral umpire, the security agencies, and all other groups involved in monitoring elections.

“This forum is designed to provide the actors an opportunity to address editors about their preparations for the 2023 general elections.

“Editors will also use this forum to seek clarifications on different issues and ask critical questions on matters relating to the elections.

“This is in line with our resolve to bring the right information to the electorate ahead of the elections,” he said.

The News Agency of Nigeria (NAN) reports that the forum had editors from various media organisations in attendance.