According to her, females constitute an overwhelming majority of the figure, accounting for 13,026 victims. 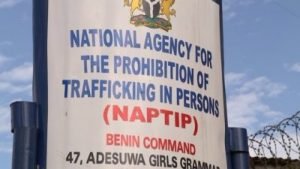 The National Agency for the Prohibition of Trafficking in Persons (NAPTIP) says 17,727 victims of human trafficking have been rescued and rehabilitated by the agency since its inception in 2003.

The Director-General of NAPTIP, Dr Fatima Waziri-Azi, revealed this at the 37th Session of the State House Briefing organised by the Presidential Media Team,  led by the President’s Special Adviser on Media and Publicity, Mr Femi Adesina, on Thursday in Abuja.

According to her, females constitute an overwhelming majority of the figure, accounting for 13,026 victims.

She also disclosed that the agency had only secured 511 convictions out of 8,005 arrests made in the past years.

The NAPTIP boss, who briefed on key updates in her agency’s efforts to arrest and prosecute perpetrators of human trafficking, domestic violence and other related offences, noted that there are 261 ongoing cases in various courts nationwide.

“The agency has so far rescued, sheltered and rehabilitated over 17,727 victims of human trafficking. 4,272 are males while 13,026 are females. Children also form the bulk of that number; amounting to 8,935.

“The 394 victims who have gone through our shelters from January 2022 to date received medical support, psycho-social support and legal assistance. NAPTIP has also sponsored 16 VoTs to universities across the country.

“Three of such graduates are now officers of NAPTIP.”

She noted with concern that NAPTIP had secured less than a thousand convictions despite arresting over 8,000 human traffickers in the past years.

She, however, attributed this to deliberate efforts of victims to frustrate NANTIP’s investigations into their cases, saying that most of the victims were not cooperating sufficiently with the agency.

“One of the challenges we have is victims not wanting to cooperate with us, because the traffickers are most times, family members.

“International law stipulates that you don’t force victims to cooperate with the system.

“What you do is encourage them, and for us in NAPTIP, when we come, we debrief them, ‘Okay, tell me the name of your trafficker.’ And they say ‘Oh, I don’t remember.’

“The simple fact is that these people are being threatened. Most of them are threatened personally. Some of them, their families have been threatened.

“And like I said in my presentations, sometimes your trafficker might not force you to take oaths in Nigeria, because they don’t want you to suspect anything. But when you get to the destination country, they make you swear oaths there.

‘’So, they have their own foreign shrine, where they’ll make you swear oaths. And for those that don’t operate in the oath realm, they now video you nude and keep threatening you that, ‘if you report, we’ll expose you,’” she said.

According to her, lack of cooperation from source or vulnerable communities also stems from beliefs that the traffickers are helpers and should, therefore, be protected from NAPTIP.