While urging the participants to be good ambassadors of FRC, Muruako tasked them to apply more fiscal responsibility to check corruption in their various states. 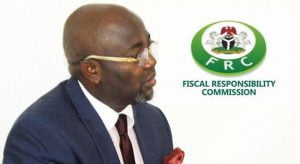 The Fiscal Responsibility Commission (FRC), on Monday in Abuja said that the agency caused agencies to remit N2.6 trillion to the federation account in 12 years.

The Chairman of FRC, Chief Victor Muruko, said this at the opening of a five-day capacity building training for Fiscal Responsibility Boards of Kaduna and Sokoto States.

Muruako said that the remittances made into the Consolidated Revenue Fund (CRF) came as operating surpluses from revenue generating agencies.

While urging the participants to be good ambassadors of FRC, Muruako tasked them to apply more fiscal responsibility to check corruption in their various states.

According to Muruako, in our previous activities, we have saved the government a huge sum of money.

“From our fiscal verification, we made a lot of observations that our revenue monitoring recovered tens of billions to the consolidated revenue fund and that is prevention of corruption.

“Those funds in those agencies would have been available for public officers to syphon but we caused them to remit them to the government coffers.

“More than N2.6 trillion was paid into the CRF of the Federal Government in the past 12 years as operating surplus from government corporations,’’ Muruakor said.

According to him, the efforts of the agency have become major resources to the National Assembly in terms of ensuring compliance to extant laws on revenue generation.

“Notably, the commission participated as the reference agency in the over four months revenue hearings in 2021 by the Senate and the House of Representatives.

“This actually raised operating surplus remittance from N213 billion to 313 billion and the total independent revenue from 532 billion in 2020 to 1.2 trillion in 2021,’’ Muruako said.

He said that the commission was working toward producing a template for the preparation of the Medium Term Expenditure Framework (MTEF) and establishment of Fiscal Responsibility Institute.

According to Muruako, this will help to guide agencies of government to strengthen prudence and accountability in the management of public finance.

Earlier, the Chairman, Fiscal Responsibility Agency, Sokoto, Alhaji Aliyu Muhammad, said that the training was critical to enable the agency develop sufficient capacity to deliver in its mandate, particularly on ensuring transparency and accountability.

On his part, the Chairman of Fiscal Responsibility Commission, Kaduna, Mr Murtala Dabo, said that the training would assist the commission to institutionalise good governance in the state.

According to him, fiscal responsibility cannot be overemphasised, the resources are scarce so we must ensure there is prudence in spending and there is real value for money.