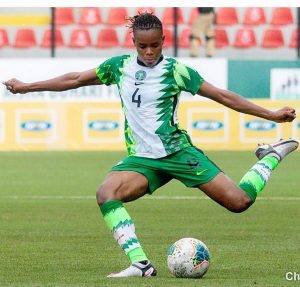 Super Falcons of Nigeria have declared, following their 1-2 lost to the Bayana Bayana of South Africa, that their focus remain to retain the trophy of the Women Africa Cup of Nations (WAFCON).

Glory Ogbonna, an ace defender, stated this when she spoke with the News Agency of Nigeria (NAN) on Wednesday from the team’s camp in Morocco.

She said that Falcons loss to the South Africa team was not deliberate as they went into the game with the determination to win.

“We never planned to lose that game because we were all determined to defeat then as we usually do.

“Whatever must have happened in that game is in the past. We have sat and reviewed the match against South Africa and we will work on our little mistakes in out next game.

“Perhaps, we are yet again going to witness what happened in Ghana in 2018 when the same team defeated us in the first game and we still went ahead to win the trophy.

“We are not disturbed with this loss, the competition is not over for us, it is for us to learn from our mistakes and adjust accordingly in our next game.

“We are not under any pressure and the mood in the camp is a very relaxed one and concentrating on out next game” she stayed.

NAN reports that the 2022 WAFCON got underway on Saturday with the Nigeria team having their first feel of the competition on Monday against South Africa which they lost 2-1.

Falcons are drawn in Group C with South Africa and debutant Botswana and Burundi.

The four semi-finalists in the competition will compete at the 2023 FIFA Women’s World Cup to be co-hosted by Australia and New Zealand.

Falcons have won nine out of 11 past editions of the competition.