He said that the party would organise itself and begin mass campaign for the 2023 general elections. 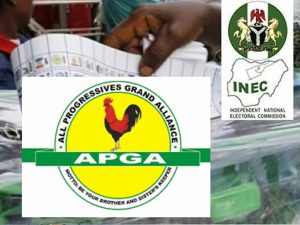 The Chairman of the All Progressives Grand Alliance (APGA) in Enugu State, Mr Ndubuisi Enechionyia, says voters’ support rather than money is required to win the governorship election.
Enechionyia said this in an interview with the News Agency of Nigeria (NAN) in Enugu on Wednesday.
He said that the party would organise itself and begin mass campaign for the 2023 general elections.
He expressed confidence on the ability of the party’s governorship candidate, Frank Nweke Jr., to sway votes for the party.
NAN reports that Nweke Jr. emerged the winner of the APGA primary election on Sunday.
“What APGA needs to win the election in the state are the masses, protection of their votes and not money.
“All we need to do is to present a picture of what the people want and once they like it, the masses will jump on board and other things will fall in place.
“So, what we are doing now is to organise ourselves around our candidate, Frank Nweke Jr. and draw up a roadmap.
“Soon, he will lunch his manifesto.
READ ALSO:https://brandpowerng.com/court-orders-interim-forfeiture-of-nok-university-other-property-linked-to-ex-director/

“I am certain it is a manifesto of hope and anybody who sees it will know that something has changed.
“If it is money, all the money we need is in Enugu and if it is the people, all the people we need are in Enugu,” Enechionyia said.
He further said the main task before the party was to get the people to believe in what it could do differently, if given the mandate to lead the state.
According to him, APGA is out to rescue the state and is ready to commence a statewide campaign tour soon.
He disclosed that Gov. Chukwuma Soludo of Anambra is expected to launch the electioneering campaign in Enugu state.