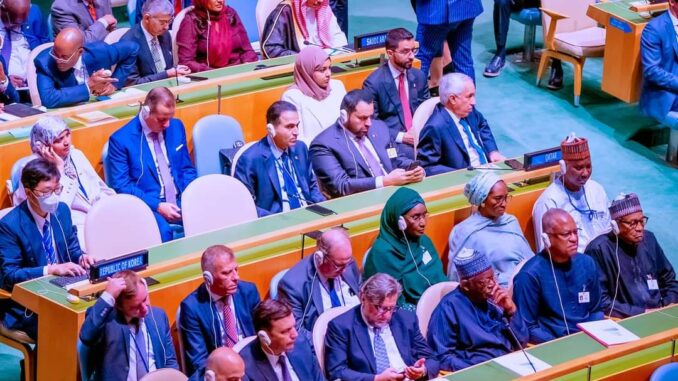 SDG 16 is about peace, justice and strong institutions.

The UN correspondent of the News Agency of Nigeria (NAN) reports that the SDGs Shadow Report 2022 was launched on the sidelines of 77th session of the United Nations General Assembly (UNGA) in New York.

Speaking on the Report, the Executive Director of CISLAC, Mr Auwal Rafsanjani, said there were improvements in two indicators in 2022 in measuring SDG 16 as compared to three in 2021 and six in 2019.

“This improvement, which can be seen in the policy areas of money laundering and asset recovery, is attributed to the passage and assent into law of the Money Laundering (Prevention and Prohibition) Bill and Proceeds of Crime Management Bill in May 2022.

“The Money Laundering (Prevention and Prohibition) Act 2022 aims to strengthen the powers of relevant agencies in dealing with challenges posed by money laundering by expanding the scope of money laundering in the prevention, prohibition, detection, prosecution and punishment of offenders.

However, he said, the lack of progress on other indicators could be attributed to three major factors, including the worsening insecurity across Nigeria which raised concern amongst citizens.

Second factor, he said, was high level of corruption amidst an increase in national debt and the fights against tangible progress on the actions of the government against freedom of speech and freedom of the press.

“As seen on to the 2021 Corruption Perception Index (CPI) released globally by Transparency International where Nigeria scored 24 out of 100 points, which is its worst since 2012 when the methodology of the CPI was reformed.

“Another area to be concerned about is Nigeria’s revenue generation problem which has led to an enormous increase in borrowing.

“Official data has shown that Nigeria had a revenue of N1.63 trillion in the first quarter of 2022, which was not even enough to pay the debt of the country for that quarter which was at N1.94 trillion,’’ he said.

On freedom of the press, the official said the fining of some media houses in August 2022 for the airing of messages on the security situation speaks to this matter.

“Our position is that achieving the Sustainable Development Goals will become most challenging where there is no solution to the aforementioned challenges,’’ he said.

This edition provides insight for the delayed progress and stagnation under the SDG 16 targets and proffers recommendations where needed.

It is hopeful that these recommendations be followed through by the appropriate authorities to guarantee the protection of the lives and freedom of Nigerians as well as reduce corruption within the government.

He thanked the Transparency International for their technical and strategic support and the European Commission for providing support for the publication through the SANCUS project.

The Report, which is the 5th edition of a series of annual shadow reports, seeks to measure Nigeria’s progress on SDG 16, specifically targets 16.4 which deals with anti-money laundering.

This Report was prepared using a Transparency International global template which helps for cross chapter comparison amongst countries.

The Report was produced by CISLAC as Transparent International Nigeria under the project which seeks to improve democratic accountability of public institutions and anti-corruption deficits by Strengthening Accountability Networks among Civil Society (SANCUS), which is supported by the European Union.

The aim of the Report is to monitor and explore the progress within the agenda 2030 with the focus on the SDG 16 targets earlier mentioned (16.4; 16.5 and 16.10) which have been analysed in depth.

The research encompasses over 14 policy areas and 76 indicators distinctly developed as part of the global Transparency International project of ‘shadow reporting’ the official Voluntary National Reports (VNRs) prepared by the governments as a self-assessment against the SDG goals.