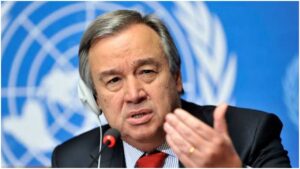 UN Secretary General António Guterres has condemned the missile strike on the Ukrainian port of Odessa, which came one day after Kiev and Moscow struck a deal to unblock grain exports.

The Ukrainian military said two Russian missiles were intercepted by air defences on Saturday and two others hit the commercial port on the Black Sea.

The United Nations and Turkey had helped broker the agreement amid worries about growing global food insecurity.

“The secretary general unequivocally condemns reported strikes today in the Ukrainian port of Odessa,” his deputy spokesman Farhan Haq said in a statement.

“Yesterday, all parties made clear commitments on the global stage to ensure the safe movement of Ukrainian grain and related products to global markets.

“These products are desperately needed to address the global food crisis and ease the suffering of millions of people in need around the globe.

“Full implementation by the Russian Federation, Ukraine, and Turkey is imperative,” the statement said.

In the agreement, Russia pledged to allow ships to sail through a designated sea corridor and not to fire on them.

The ports involved were also not to be attacked.