SDR is an international reserve asset, created by the International Monetary Fund (IMF) in 1969 to supplement its member countries’ official reserves. 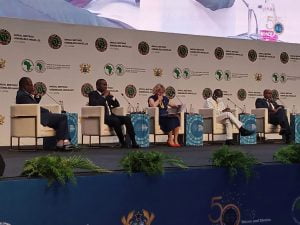 Ford said this at the 2022 annual meetings of the African Development Bank (AfDB) during a seminar on Special Drawing Rights (SDRs) in Accra, Ghana on Wednesday.

The News Agency of Nigeria (NAN) reports that the SDR is an international reserve asset, created by the International Monetary Fund (IMF) in 1969 to supplement its member countries’ official reserves.

NAN reports that till date, a total of SDR 660.7 billion (equivalent to about $943 billion) have been allocated.

This includes the largest-ever allocation of about SDR 456 billion approved on Aug. 2, 2021.

This most recent allocation was to address the long-term global needs for reserves, and help countries cope with the impact of the COVID-19 pandemic.

The value of the SDR is based on a basket of five currencies—the U.S.dollar, the Wuro, the Chinese Renminbi, the Japanese Yen, and the British Pound Sterling.

She said the country was actively exploring the options of channelling the SDRs into the multilateral development banks including the AfDB.

Ford said that for the options to be viable, the UK and other partners would design a mechanism that would meet a legal procedure for maintaining the SDRs to have impact on the banks’ lending capacity.

She also encouraged developed economies that were yet to channel their new SDRs low income countries to do so.

“We have committed one billion dollars of those SDRs into the IMF poverty reduction growth trust to offer concessional finance to lower countries including 39 African countries.

“The UK also committed to channelling 20 per cent of the new SDRs that is four billion dollars to support vulnerable countries.

“The Chancellor announced that the UK will channel SDR 2.5 billion worth, an international reserve asset (equivalent to £2.6 billion) to the newly created IMF Resilience and Sustainability Trust, to provide affordable, long-term financing to low income countries and vulnerable Middle East countries.

“It is to address challenges such as climate change, energy security, pandemic preparedness.

Dr Akinwumi Adesina, the President of the AfDB Group, said that providing the SDRs through the multilateral development banks would help leverage the funds.

Adesina said that the channeling the SDRs through the AfDB would help strengthen the global financial architecture and help people feel the impact in their lives in the continent.

He said that the leveraged SDRs would be used to provide additional capital and financing for the development bank across the continent.

Hott emphasised the urgent need for speedy channelling of the SDRs to Africa to accelerate growth.

“During the COVID-19, there was political will and monies were mobilised and things worked. So, that kind of political will should be adopted to channel the SDRs to African countries to accelerate our development,’’ he said.

Mr Nicolas Kazadi, the Minister of Finance, Democratic Republic of Congo, commended the UK for their support.

Mr Admassu Tadesse, the President, Trade and Development Bank Group, said the Bank had played a strong role in strengthening intermediaries to get funds to the Small and Medium Entrepreneurs (SMEs).

Mr Ken Ofori-Atta, the Chairperson, Board of Governors of the AfDB, said that actions and speed were needed to allocate the SDRs to address issues facing the continent.