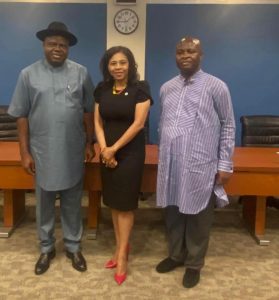 Bayelsa State Government and the State of New Jersey in the U.S. have resolved to exploit the abundant, mutually-beneficial business opportunities in the two states, the News Agency of Nigeria (NAN) reports.

NAN reports that Diri, who arrived U.S. on Tuesday, on economic and cultural mission, to two states of New York and New Jersey met with potential investors and relevant stakeholders on Thursday and Friday.

The governor was accompanied by the Consul-General of Nigeria in New York, Amb. Lot Egopija to most of the meeting and visits in the two states.

Diri, with his delegation, at the New Jersey sought investment opportunities and possible collaboration with some key institutions, presented his economic initiatives to the Secretary of State, Ms. Tahesha Way.

Mr Philip Murphy, New Jersey Governor was represented by Way at an economic meeting in Trenton, New Jersey capital with the governor and his delegation.

The governor said that both Bayelsa and the State of New Jersey had similar coastal terrain and said his administration was desirous to understudy key models of infrastructural development in the American state for the good of Bayelsa State.

He told his host that the Bayelsa State delegation had met with Donald Milford Payne Jr., top U.S. Congressman representing New Jersey, members of the African American Chamber of Commerce in New Jersey.

He also said they have visited Rutgers New Jersey Medical School, Newark, Stevens Institute of Technology, and Ricovr biolaboratory, an arm of the Princeton University, New Jersey, that is developing cutting-edge saliva diagnostic technology to seek partnership and support.

According to the Governor, Bayelsa State is seeking partnership in the development of Bayelsa Medical University in Yenagoa, exchange programmes for students, investments in renewable energy, and broadband technology to improve connectivity.

“We are here to seek further opportunities for the growth of our country and our dear State of Bayelsa. Bayelsa State is the golden egg of the country where crude oil was first struck in commercial quantities.

“But today, we are all aware that oil is almost given way. We are richer in natural gas deposits and that is a great source for cleaner energy that the world seeks.

“We are looking for investors in this area and in health, we have a young Medical University.

“We have been looking for opportunities for programmes exchange, modelling our curriculum to suit modern medical technology, opportunities like this to see other institutions that will collaborate with us.’’

Way, who presented a letter of welcome personally signed by Governor Murphy to Diri, appreciated the genuine intention of the Bayelsa Governor to attract investments opportunities to his state.

She assured that the government in New Jersey would be willing to help mobilise investors to identify opportunities in Bayelsa State.

Mr Victor Lawrence, a Senior Research Scientist at Stevens Institute of Technology and an expert in Broadband technology, said Brass Island in Bayelsa State had been identified as a great location.

Lawrence said Brass Island had been identified as great location to site a landing station for Telcom submarine cables that would be commercially rewarding to the oil-rich State.

Also, the Permanent Secretary, Bayelsa State Ministry of Trade, Industry and Investments, Mrs Patience Abah, said the delegation was excited at the huge opportunities at the various facilities visited.

She said that a technical team from the State would immediately explore the opportunities so identified.

NAN reports that Diri will further showcase the state’s rich economic and cultural resources at a two-day Ijaw diaspora convention holding in New Jersey from Saturday to Sunday.

The governor is expected to proceed to Cuba on Monday to continue with his trade and cultural mission and he will be expected back in the U.S. on Wednesday to meet with the Nigeria’s UN Deputy Secretary- General, Amina Mohammed.