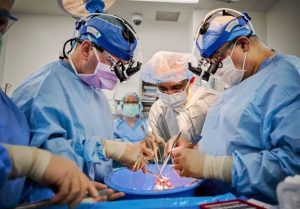 The surgeries, known as xenotransplants, were performed on June 16 and July 6 at NYU Langone, the team said in a release.

The hearts were procured from pigs that had 10 genetic modifications, including four porcine gene knockouts to prevent rejection and abnormal organ growth.

This is as well as six human transgenes (knock-ins) to promote the expression of proteins that regulate important biologic pathways that can be disrupted by incompatibilities between pigs and humans.

The pig hearts were transplanted into recently deceased donors maintained on ventilator support.

No signs of early rejection were observed in either organ, and the hearts functioned normally with standard post-transplant medications and without additional mechanical support, according to the team.

The team said the latest advances in xenotransplantation move the field closer to realising a new supply of organs for those facing a life-threatening disease.