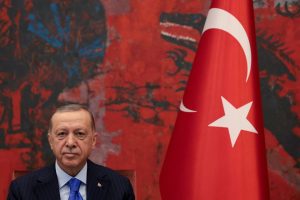 Turkish President Tayyip Erdogan said on Thursday he wanted grain from Russia to be exported too, adding Vladimir Putin was right to complain that grain from Ukraine under a UN-backed deal was going to wealthy rather than poor countries.

The grain-export agreement aimed to avert a global food crisis by guaranteeing the safe passage of ships in and out of Ukrainian ports, allowing them to export tens of millions of tonnes of grain that had been blockaded by Russia’s invasion.

“The fact that grain shipments are going to the countries that implement these sanctions (against Moscow) disturbs Mr Putin.

“We also want grain shipments to start from Russia,” Erdogan said at a news conference with his Croatian counterpart.

“The grain that comes as part of this grain deal unfortunately goes to rich countries, not to poor countries,” he added.

On Wednesday, Russia’s President Putin floated the idea of limiting the deal given it was delivering grain, other food and fertiliser to the European Union and Turkey rather than to poor countries.

The Istanbul-based coordination group, which includes the four signatories, said some 30 per cent of cargo has gone to low and lower-middle income countries.

NATO member Turkey has close ties with both Russia and Ukraine and has sought to balance relations through the war, rejecting Western sanctions on Moscow while also criticising the Russian invasion and supplying Kyiv with armed drones.

U.N. and Russian officials met in Geneva on Wednesday to discuss Russian complaints that Western sanctions were impeding its grain and fertilizer exports despite the UN agreement.

Ismini Palla, UN spokesperson for the Black Sea Grain Initiative, said a drop in global wheat prices in August was partly due to exports resuming from Ukraine, and ensuring food and fertilizer supplies was critical to maintaining this trend.

Despite some 100 cargo ships having left Ukrainian ports since the deal was signed in late July, Ukraine’s wheat has still not been reaching its traditional clients in Africa at anywhere near normal volumes.

The UN- and Turkey-brokered deal must be renewed every 120 days by agreement of the parties.

It expires in late November.