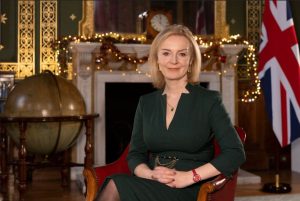 The Inter Party Advisory Council (IPAC) says Nigeria should learn from the emergence of Liz Truss as the new UK Prime Minister and shun  do-or-die and bitter politics.

The News Agency of Nigeria (NAN) recalls that the 47-year-old Truss was on Monday,  voted as the new Prime Minister of UK.

The IPAC Chairman in Lagos State, Mr  Olusegun Mobolaji told NAN on Tuesday that Nigeria, being the most populous African country must take some lessons from leadership succession in UK.

“Nigeria has a lot to learn both from other neighbouring African countries around us and also from other countries like UK.

“The reason why we are a country is for us to be able to have a standard. We may not be what we want to be at a go, but we should be able to learn from other places.

“What happened seamlessly in UK in choosing their Prime Minister should teach politicians that public office is no one’s property that should become a do-or-die thing or bitter fight.

“It is a public office and it has to do with selfless service, not selfish one,” the IPAC boss said.

He said that the outgone UK prime minister, Moris Johnson, resigned willingly in July, over a particular scandal in his government and such should be instructive to disciplined leaders.

Mobolaji said: “Considering the age of  Truss, it is instructive for Nigeria to give room for youths and women to build this country.

“It is not about how long you have been there, it is about the ability, capability, qualification and merit. It is about putting the round peg in the round hole.

“It’s about doing the right thing without favouritsm and tribalism. We need more of young, brilliant, highly cerebral young men and women to be in place of leadership.”

He noted that a woman could do better than a man, saying “that one is a woman is not a limitation, it doesn’t mean she can’t do better.*

Mobolaji said that leadership should not be about gender or who had done something for somebody before, but about capacity, ability, and what people needed and deserved.

Before her emergence as Tory leader and British PM, Truss was UK’s secretary of state for foreign, commonwealth and development affairs since 2021 and minister for women and equalities since 2019.

She emerged as the new UK prime minister/leader of the United Kingdom’s Conservative Party,  after defeating her rival, Rishi Sunak, in a Tory vote where she polled 81,326 votes to beat Sunak who polled 60,399 votes.