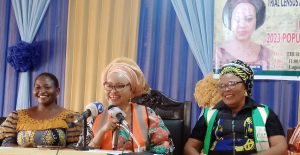 The National Population Commission (NPC) has called on Lagos residents to cooperate with the commission, as it prepares to begin the trial census.

The Federal Commissioner representing Lagos State, Mrs Abimbola Salu-Hundeyin, made the call in Lagos on Thursday, during a media conference.

The conference was on the commencement of the Trial Census and the Administration of Oath of Secrecy for Supervisors and Enumerators, in Preparation for the 2023 Population and Housing Census.

Salu-Hundeyin said that data gathered during Census was for better planning towards better lives of the residents, hence, Lagos residents should cooperate to make the process easier and successful.

She said that the conduct of Census was consistent with the constitutional mandate given to the commission in Section 24 (A) of the third Schedule of the 1999 Constitution (as amended).

According to her, the Constitution mandates the commission ”to undertake regular enumeration of the population of Nigeria through the conduct of censuses and demographic surveys”.

She said that the Trial Census, therefore, was another of the means of perfecting the methodology and processes of the gigantic exercise.

Salu-Hundeyin said that the Trial Census was a dress rehearsal in the census preparatory activities, a process in which all census operations and equipment are tested in a detailed and comprehensive manner.

She said that in preparation towards the Trial Census, therefore, different categories of training exercises had been carried out.

The Federal Commissioner said that the Trial Census would start on July 18, after the house numbering process.

”The commission is happy to inform that the whole processes have been digitalised. The use of paperwork at all levels has been eliminated and the Personal Digital Assistant (PDA) device is fully deployed.

”This implies that the processes to be used now will ultimately be adopted during the main census period.

”This is why the functionaries have been enjoined and compelled to take the whole processes serious, by regular attendance to classes and punctually, and therefore master the step by step of the digital methodology and operations of the forthcoming digital census.

”I urge the very important residents of the State of Excellence to cooperate with the functionaries by answering all the many questions posed by the functionaries and ensure same are entered into the PDA, for it is your right to be counted.

”Remember Census data is for better planning towards better lives of the residents. So I personally and I repeat, urge Lagosians full participation in this Trial Census, for it is for our collective benefit,” Salu-Hundeyin said.

She said that for the Trial Census, three Local Government Areas (LGAs) each, would be experimented on from the three Senatorial Districts in Lagos.

”We are pleading that the residents the LGAs cooperate fully and ensure they are fully captured by answering all questions.

”Before the Trial Census, we shall be carrying out Houselisting exercise from Wednesday, July 13 to July 17.

”Finally, I will like to implore all facilitators to note that one important import that you have to bear in mind is that whatever mistake make at this critical level will affect the result of the analytical presentation from the survey.

”Further and of great importance today is the oath of secrecy ceremony, for all the functionaries, including the Federal Commissioner, because we are participating in the census exercise in accordance with the provisions of the law.

”We must take the oath of secrecy because functionaries must know and remember that every information gathered during the Trial Census is sacred, it is important, it cannot be disclosed under no circumstances, except through due process of the law,” she said.