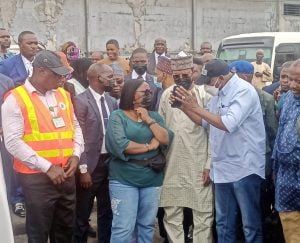 The Minister of Transportation, Alhaji Mu’azu Sambo, on Friday said that the concession agreement for terminal operators at Nigerian seaports would be concluded within the next 45 days.

Sambo made this known during his tour of Lagos seaports and terminals.

According to Sambo, all necessary factors have been factored into the new agreement which is expected to correct the shortcomings in the first concession agreement.

He, however, commended the efforts of terminal operators in transforming port operations over the years even as he appreciated the massive job opportunities availed Nigerians at the terminals.

“At SIFAX alone, I have learnt that over 7,000 Nigerians have been employed. Each Nigerian employed means that a minimum of ten people are being cared for either directly or indirectly.

“So, this means that SIFAX is responsible for feeding over 70,000 Nigerians. This is just one terminal caring for this number of people and probably educating their children,” he said.

He noted that automation was the only way to drive efficiency at the nation’s seaports and encouraged Nigerian Ports Authority (NPA) to intensify efforts geared towards automated processes.

“While we encourage NPA to improve automation, we are thinking seriously about the port community system because it is crucial to the development of the maritime sector.

“So, with automation and an efficient port community system, all port processes will be enhanced very soon,” he said.

Sambo was accompanied on the tour of Lagos ports and railway by the Managing Director of NPA, Mr Mohammed Bello-Koko; Director General of Nigerian Maritime Administration and Safety Agency (NIMASA), Dr Bashir Jamoh.

Also among the entourage was the Managing Director of Nigerian Railway Corporation (NRC), Mr Fidet Okhiria and executive directors of other transport agencies.