There should be no sanction for holding a country’s passport, IOC president warns

“This is against all the principles we are standing for. If we leave this to the governments, then we are becoming a political tool.” 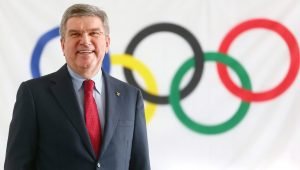 International Olympic Committee (IOC) president Thomas Bach has warned international sports federations that they cannot succumb to government influence to sanction athletes based on their country of origin.

Bach gave the warning in the light of Russia’s invasion of Ukraine.

“We need the respect of the governments for our role,” Bach said when addressing the Association of Summer Olympic International Federations (ASOIF) general assembly in Lausanne late Wednesday.

“Look at our friends from tennis, in Paris, Russian players can play as neutral athletes, in London, at Wimbledon, the Government is saying no way, and if we allow this, if we give in to this, then we are lost.”

The 68-year-old Bach warned further: “If you open this gate, today, it is Russia and Belarus, tomorrow it is your country, there is no country in the world which is loved by every other government.

“This is against all the principles we are standing for. If we leave this to the governments, then we are becoming a political tool.”

Bach did say that “everybody who is supporting the war can and should be sanctioned, but the rights of somebody who does not support the war must be respected.

This seems to be a volte face or a departure from what the IOC executive board had said on Feb. 28, four days after the invasion began.

It had said then: “To protect the integrity of global sports competitions and for the safety of all the participants, we recommend that international event organisers should not invite or allow the participation of Russian and Belarusian athletes and officials.”

“If this was not possible, then Russian or Belarusian nationals, be it as individuals or teams, should be accepted only as neutral athletes or neutral teams,” it had added then.