an eyewitness explained that the congregation was caught unawares when the hoodlums started shooting, saying people were running to avoid being shot while the gunmen threw dynamites into the church, that exploded on the altar of church. He said the church was full brim, adding that no fewer than 500 people were in the church when the gunmen started shooting and no fewer than 50 were killed with several others injured in the attack.

Suspected terrorists on Sunday attacked St. Francis Catholic Church in the Owaluwa area of Owo, headquarters of Owo Local Government Area of Ondo state, killing about 35 members of the congregation, during the church service, while several others were left injured.

The armed men invaded the church in Governor Rotimi Akeredolu’s country home came in a Volkswagen Golf 4 and struck at about 11:15 am at the peak of the service. In what appears to be a well-coordinated attack, they shot directly at people even as they lay on the ground for protection with some of the terrorists blocking the entrance of the church to prevent the people from escaping.

The Nigerian Tribune reports that an eyewitness explained that the congregation was caught unawares when the hoodlums started shooting, saying people were running to avoid being shot while the gunmen threw dynamites into the church, that exploded on the altar of the church.

The gunmen were said to have used dynamites to detonate the altar of the church while mass was going on, leaving part of the altar caved in.

One of the priests of the church, Rev. Father Andrew Abayomi, explained that the gunmen operated for about 25 minutes, shooting sporadically inside the church

“We were about to round off service. I had even asked people to start leaving, that was how we started hearing gunshots from different angles.

“We hid inside the church but some people had left when the attack happened. We locked ourselves in the church for 20 minutes. When we heard that they had left, we opened the church and rushed victims to the hospital.”

Another witness, Taiwo Kasali, a motorcyclist said he was approaching the church when he saw the people running away and had to stop, only for him to see four men entering a Golf Volkswagen car.

He said some men of the Amotekun Corps who were coming with their vehicle gave the hoodlums a hot chase saying, “I learnt the gunmen abandoned their vehicle and ran away.”

He, however, lamented how the hoodlums were able to carry out the attack in the heart of the town, saying the church is sandwiched between the main market and the palace of the Olowo of Owo, and that the hoodlums operated unhindered for over 25 minutes.

Lamenting the attack, the Bishop of Ondo Diocese, Bishop Jude Arogundade, who visited the scene of the attack said, “This is madness! All over the world, there is no where people will plan to come and kill babies, children, husbands and wives worshipping on a special day, the Pentecost day.

“They threw dynamites to blow off the altar down to the sanctuary. This kind of desecration can only be done by the evil ones.

“Probably what the world should know is that Nigeria is in war and this kind of war is directed at civilians. I don’t know the point someone is trying to make with this kind of evil but whatever point they intended to make they have not made any point and they have not achieved anything, unfortunately.”

Gov. Akeredolu pledges to hunt down and deal with the perpetrators 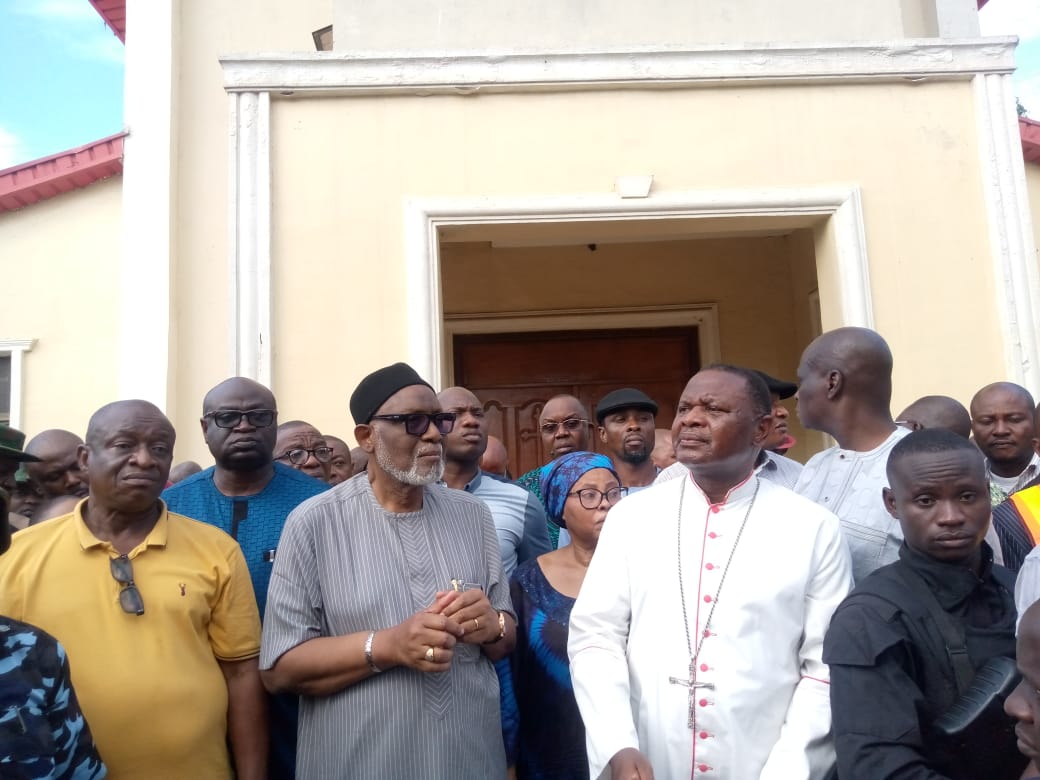 While condemning the attack, Gov. Rotimi Akeredolu of Ondo State assured residents of the state that the government would hunt down assailants that attacked and killed worshippers of St. Francis Catholic Church, Owo on Sunday.

In a statement released by Mr Richard Olatunde, the Chief Press Secretary to the Ondo State Governor, on Sunday, Akeredolu said, “We are deeply saddened by the unprovoked attack and killing of innocent people of Owo, worshiping at the St. Francis Catholic Church, Owa-luwa Street, on Sunday.

“The vile and satanic attack is a calculated assault on the peace-loving people of Owo Kingdom, who have enjoyed relative peace over the years.

“It is a black Sunday in Owo. Our hearts are heavy. Our peace and tranquility have been attacked by the enemies of the people. This is a personal loss, an attack on our dear state.

“I have spoken to the Bishop of the Catholic Diocese of Ondo, Most Reverend Jude Arogundade, who is presently on his way to Owo.

“Similarly, I have had to cut short my party’s national assignment in Abuja and visit Owo immediately,” he stated.

According to the governor, this is an unexpected development and I am shocked, to say the least.

“Nevertheless, We shall commit every available resource to hunt down these assailants and make them pay.

“We shall never bow to the machinations of heartless elements in our resolves to rid our state of criminals,” he said.

The governor condoled with the people of Owo, especially families of victims of the attack.

“I commiserate with my people in Owo, particularly families of the those who lost their lives to this ugly and unfortunate attack.

“I extend my condolences to Olowo of Owo, Oba Gbadegesin Ogunoye as well as the Catholic Church,” he stated.

Akeredolu enjoined the people to be calm and be sensitive, asking them not to engage in any act that could complicate the crisis.

“I urge our people to remain calm and vigilant. Do not take laws into your hands.

” I have spoken to the heads of the security agencies. I have equally been assured that security operatives would be deployed to monitor and restore normalcy to Owo kingdom,” Akeredolu said.

The Christian Association of Nigeria (CAN) has also condemned the killing of worshippers by gunmen in Owo, Ondo State, describing it as satanic and unacceptable.

This is contained in a statement by Pastor Adebayo Oladeji, Media Assistant to the CAN President, Rev. Samson Ayokunle, on Sunday in Abuja.

It called on security agencies to quickly apprehend the perpetrators and bring them to justice.

“We call on the state governors to meet with the President to find a lasting solution to these killings,” it added.

CAN also called for an overhaul of the country’s security architecture and stoppage of the de-radicalisation programme for ex-insurgents.

“The leadership of the Christian Association of Nigeria has condemned the unprovoked attack and killing of several innocent worshippers at the St Francis Catholic Church, Owa-luwa Street, Owo and called on the security agencies to apprehend the perpetrators of the dastardly criminality.

“This is sad, wrong, condemnable, outrageous, unacceptable and satanic.

“There is no explanation for this unprovoked attack and assault on a place of worship,” it said.

CAN urged President Muhammadu Buhari to cancel the deradicalisation programme for ex-insurgents, alleging that the programme only recycles the terrorists to commit more harm.

The association urged that focus should not be only shifted to politics of 2023 elections but also securing the lives of the people.

“We are praying for the government and the security agencies to get it right before it will be too late,” the association added.

It commiserated with all the bereaved families, the Olowo of Owo, Oba Gbadegesin Ogunoye, Catholic Secretariat of Nigeria and the Ondo State Government over the incident.

The President, in a condolence message released by his Special Adviser on Media and Publicity, Mr Femi Adesina, on Sunday in Abuja, said only wicked and devilish people could have conceived and carried out such dastardly act.

According to him, eternal sorrow awaits them both on earth here, and ultimately in the hereafter.

”No matter what, this country shall never give in to evil and wicked people, and darkness will never overcome light. Nigeria will eventually win,” he said.

Buhari mourned the dead, and condoled with their families, the Catholic Church, and the Government of Ondo State.

He charged emergency agencies to swing into action, and bring succor to the wounded.