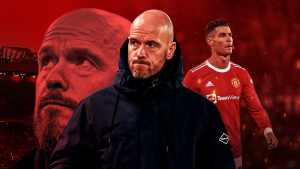 Erik ten Hag says Manchester United star Cristiano Ronaldo is not for sale and remains in his plans.

The 37-year-old forward returned to Old Trafford last summer in a shock switch from Juventus.

Ronaldo still has a season remaining on his deal.

But speculation is rife about a move for a player who is absent from United’s pre-season tour in Thailand and Australia due to a family issue.

“He’s not with us and it’s due to personal issues,” manager Erik ten Hag said.

“We are planning with Cristiano Ronaldo this season. So, that’s it. I’m looking forward to working with him.

“He hasn’t told me (he wants to leave). I have read but what I say is Cristiano is not for sale. Cristiano is in our plans and we want to get success together.”

Ten Hag also confirmed that Harry Maguire will remain as Manchester United captain after speculation over the role.