In a letter addressed to the secretary-general, the University said: “The school would like to record its gratitude for the contribution you have made and for your ongoing commitment to the school and the university.” 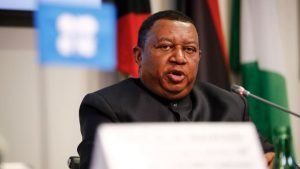 The University of Dundee UK, has reappointed Dr Muhammad Barkindo, Secretary-General of the Organisation of the Petroleum Exporting Countries (OPEC) as Honorary Professor in its School of Social Sciences until May 2026.
The reappointment was announced on Thursday at a symposium organised by the University and the Centre for Energy, Petroleum, Mineral Law and Policy (CEPMLP), with White and Case LLP, in London, UK.
In a letter addressed to the secretary-general, the University said: “The school would like to record its gratitude for the contribution you have made and for your ongoing commitment to the school and the university.”
The symposium was titled ‘”Quo Vadis? – Oil and Gas in the 21st Century, Charting New Directions for the Oil and Gas Industry after COP26’’.
In his remarks, Barkindo underlined the importance and timeliness of the gathering, given recent industry developments, and thanked Prof. Peter Cameron, Director of CEPMLP, and all those involved for the invitation.
Barkindo recalled recent events related to climate change discussions, including the Paris Agreement and the announcement of the Glasgow Climate Pact at COP26 last year, with the U.S back at the multilateral table.
“This was all encouraging, given the pressing need to reduce global emissions, alleviate energy poverty, counter the impacts of the COVID-19 pandemic and find a sustainable way forward that leaves no country, industry or peoples behind,” he added.
He said  talks around energy, climate, and sustainable development continued to be extremely emotive and not as broad as one might hope.
Don't miss
NEWS

READ ALSO:https://brandpowerng.com/pursue-cbns-financial-inclusion-programme-ogubunka-charges-stakeholders/
He said that the conversation must be global, inclusive, fair, scientific and based on facts, not emotions.
“The new parameters of the public discourse around the energy transition seem reduced to the question: are you for or against fossil fuels?
“It is perhaps the ultimate false dichotomy. All voices need to be listened to. The challenges before us are enormous and complex,” Barkindo said
He also noted the importance of investments going forward and the need for clarity from policymakers and industry stakeholders.
In this regard, he recalled the recent call from G7 Ministers of Climate, Energy and the Environment, for oil and gas producing countries, including reference to OPEC, to play a key role in ensuring stable and sustainable global energy supplies.
From the perspective, he stated that at OPEC “this is what we do, day in, day out.”
(NAN)