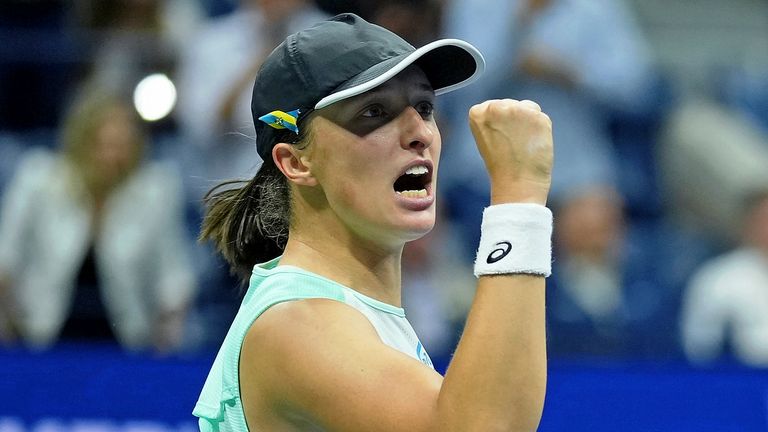 Iga Swiatek will have a chance to win her third career grand slam after defeating Aryna Sabalenka 3-6 6-1 6-4 in a gutsy come-from-behind win in Thursday’s semi-final.

Poland’s Swiatek, who has also won the French Open in 2020 and 2022, will take on Ons Jabeur in the decider after the Tunisian won her semi-final.

Jabeur had beaten the in-form Caroline Garcia in straight sets earlier on.

It continues a remarkable season for the 21-year-old Swiatek, having also reached the semi-final at the Australian Open.

She went on to record a 37-match winning streak that saw her claim six titles in a row and put a massive gap on the field as the world number one.

She won 10-of-12 opportunities against Swiatek’s second serve in the first frame, creating six break-point chances and taking three.

Things flipped in the second set, and it was all about Swiatek making the adjustments.

She won 14-of-17 points in those situations in the second frame, and converted all three of her break-point opportunities.

This came about as Sabalenka got sloppy, committing 15 unforced errors with only six winners.

Sabalenka threatened to run away with things late —- twice managing to go up a break in the third set.

But Swiatek showed composure beyond her years as she continued to fight back.

From 4-2 down in the decider, Swiatek rattled off the next four games in a row.

She went up 40-0 against Sabalenka’s serve in the final game and finished things off with her second match-point.

From her past 50 matches, Swiatek has a record of 46-4, and coming into this tournament she had 8605 ranking points —- with second-placed Anett Kontaveit down at 4360.

She is also the first number one seed to reach the US Open final since Serena Williams did it back in 2014, snapping the equal-longest drought at any grand slam in the Open Era.