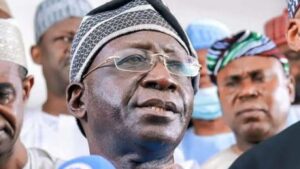 The State Working Committee (SWC) of the Kaduna chapter of New Nigeria People’s Party (NNPP), has passed a Vote of No Confidence on the state chairman, Mr Ben Kure.
Mr Albenu Gora, the state NNPP Publicity Secretary said this in a statement on Tuesday in Kaduna.
Gora said that the a vote of no confidence was passed on Tuesday at the SWC meeting in Kaduna.
He said that the SWC also passed a Vote of No Confidence on the state Legal Adviser, Mr Ibrahim Ahmed.
Gora said that the meeting also appointed Mr Nuhu Audu, a former state caretaker chairman of the party as the new chairman.
“The Kaduna SWC of NNPP held a meeting on Tuesday, Dec. 6 and after deliberation at instance of a motion moved by zone 2 Vice Chairman, Hosea Baba and seconded by state organising secretary, Alhaji Sa’ad Idris Kudan, unanimously passed vote of no confidence on state chairman, Ben Kure and Legal Adviser, Ibrahim Ahmed.
“Their removal from office was based on complaints in respect of their failure to discharge their responsibilities, neglect and dereliction of duty, misconduct in office, breach of provisions of the party constitution amoung others.
“It is no longer news that on Oct. 5, the former State Legal Adviser on the directive and instruction of the former state chairman appointed and inaugurated a state deputy chairman for the party without consent nor prior meeting and approval State Executive Committee, thereby causing a breach of the provisions of the NNPP constitution and the Electoral Act, 2022 respectively,” Gora said.