The court also asked the former minister to pay the respondents N1 million. 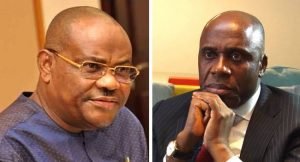 The Supreme Court on Friday dismissed an appeal by Rotimi Amaechi, former minister of transportation, seeking to stop his probe in an alleged N96 billion fraud.

Justice Adamu Jauro who led the seven member panel of justices while delivering judgment, dismissed the appeal for lacking in merit.

The apex court affirmed the judgments of the High Court of Rivers and that of the Court of Appeal which had earlier dismissed same suit for want of substance and merit.

The court also asked the former minister to pay the respondents N1 million.

Amaechi had approached the Supreme Court praying for an order of the court to prohibit his successor, Gov. Nyesom Wike from investigating his 8-year tenure as executive governor of Rivers.

The former governor represented by Lateef Fagbemi said the probe was aimed at witch-hunting, embarrassing, humiliating and disgracing him in view of his political differences with his successor.

The probe is for Amaechi to give account of how N96 billion was allegedly withdrawn from the treasury of the state government and how it was spent during his tenure.

Wike had instituted a commission of inquiry to look into alleged sale of valuable assets of the state during Amaechi’s tenure.

The News Agency of Nigeria (NAN) reports that Amaechi is a presidential aspirant on the platform of the All Progressives Congress (APC).