Support for NATO membership continues to grow in Sweden

About six per cent pointed in support, more than last month and the highest figure since the question had been posted. 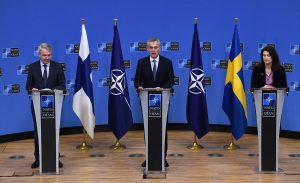 There have been more and more people in Sweden wanting their country to join NATO, according to a new opinion poll.

In the survey conducted by the Demoskop Institute on behalf of the newspaper Aftonbladet, 57 per cent of those questioned were in favour of Sweden joining the military alliance.

About six per cent pointed in support, more than last month and the highest figure since the question had been posted.

Twenty-one per cent were still against it.

The remaining 22 per cent were undecided.

Especially among voters of the governing Social Democrats, the number of supporters increased strongly.

It now stood at 41per cent, 12 per cent pointed above the previous month’s figure.

The party of Prime Minister Magdalena Andersson had in the past spoken out against NATO membership and in favour of the country’s traditional military non-alignment.

However, the Ukraine war had triggered a wide-ranging debate on NATO membership in both Sweden and neighbouring Finland.

Even the Social Democratic-leaning Aftonbladet itself had now changed its view.

“Vladimir Putin’s war shows that we must join NATO in order to guarantee Sweden’s security.’’

The newspaper wrote in an editorial on Wednesday, explaining its changed position in more detail.

Finland and Sweden had  so far been close NATO partners, but not members.

However, the Russian invasion of Ukraine could soon lead to the two Nordic countries deciding to apply for membership in the Western defence alliance.