“There is absolutely no justification for this continued violence,” he added. 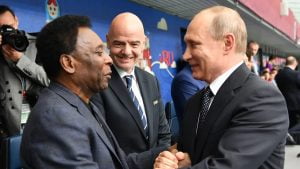 “Stop the invasion,” the 81-year-old Pele said in a letter to Putin he posted on Instagram shortly before Ukraine’s 3-1 World Cup semi-final play-off win in Scotland on Wednesday night.

“There is absolutely no justification for this continued violence,” he added.

“This conflict is wicked, unjustifiable and brings nothing but pain, fear, terror and anguish. There is no reason for it to last any longer,” the three-time World Cup winner Pele said.

“When we met in the past and exchanged smiles accompanied by a long handshake I never thought we would be as divided as we are right now.

“The power to stop this conflict is in your hands. The same ones I shook in Moscow, at our last meeting in 2017.”

Ukraine’s win moved the team into a play-off final in Wales on Sunday, with the winners going to the World Cup in Qatar.

The Russian team was suspended from 2022 FIFA World Cup qualifying after the start of the invasion.