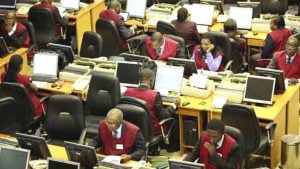 The nation’s stock market maintained its bearish position on Friday, as all market indicators dropped further amid sell pressure in large capitalised stocks.

Consequently, the year-to-date (YTD) return fell to 21.21 per cent.

The market closed negative with 10 stocks that gained and 24 losers.

A breakdown of the price movement chart shows that Ellahlakes recorded the highest gain to lead the gainers’ chart with 8.40 per cent to close at N4 per share.

On the other hand, McNichols Consolidated Plc led the losers’ chart, dropping by 9.76 per cent to close at N 1.85 per share.

Jaiz Bank was the toast of investors, accounting for 40.66 million shares valued at N37.21 billion.