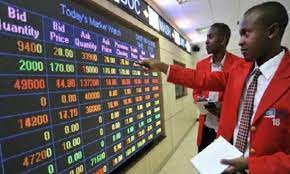 The equities market settled lower on Tuesday as market capitalisation declined by N422 billion to close at N28.567 trillion from N28.989 trillion on Monday.

The Month-to-Date and Year-to-Date returns increased to 6.8 per cent and 24.1 per cent, respectively.

Sectoral performance was broadly negative, as the Industrial Goods recorded a decline of 3.6 per cent, Consumer Goods fell by 1.8 per cent, Oil and Gas dropped by 0.8 per cent, Banking also dropped by 0.2 per cent, and Insurance fell by 0.1 per cent.

The market sentiment was positive with 19 gainers relative to 16 losers.

Transcorp Hotel topped the gainers’ chart in percentage terms with 6.48 per cent to close at N6.25 per share.

Conversely, Nigerian Breweries led the losers’ chart in percentage terms by 9.96 per cent to close at N62.40 per share.

Also, Prestige and Multiverse Mining and Exploration followed with a loss of 6.98 per cent and 4.76 per cent each to close at 40k and 20k, respectively.

Transactions in the shares of Transcorp topped the activity chart with 86.74million shares valued at N111.73 million.

MTN Nigeria was the most traded stock by value at NGN1.64 billion.