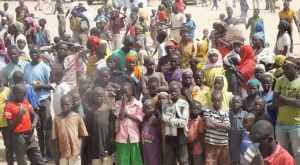 The Chairman of Internally Displaced Persons (IDPs) in Jibia Camp, Katsina State, Malam Salisu Sa’adu, says the victims are suffering from hunger, starvation and deaths in the camp.

Salisu disclosed this in an interview with the News Agency of Nigeria (NAN) in Jibia on Tuesday.

According to him, food that is provided to the refugees is not enough, hence, they are suffering from starvation, hunger and deaths.

He said there was no enough food for them, stressing that there were only two policemen guarding the camp.

“Most of us (IDPs) are sleeping without mosquitoes nets and blankets, but we thank a non-governmental organisation, Medicines San Frontier, Doctors without borders that supplied drugs to us always at the camp.

” In fact, let me tell you, in view of the hardship we are passing through,15 of us died, while 35 women gave birth under forced labour.”

Salisu appealed to state government to take steps to relocate them to their villages, to enable them to farm, and get what to feed their families before the  end of the rainy season.

“We are now almost three months here, we can’t continue like this; we really want to go back to our villages and look for what to eat with our families.

“So we are appealing to government to take cogent measures and relocate us to our places,” he said.

When contacted, the Chairman of Jibia Local Government, Alhaji Bashir Mai-tan, said that government was trying its best in feeding the refugees in the camp.

Mai-tan said apart from that, the local government released N200,000 daily for some of their needs.

Maitan said he had been having  sleepless nights to ensure peace and security in the area, as well as paying of ransome to secure release of people from bandits.

He said that currently, over 1,500 of his people were still in bandits hostage, advising that government alone could not fight banditry.

The News Agency of Nigeria (NAN), observed, during a visit to the camp, that some of the IDPs looked worried, hungry and in tears.