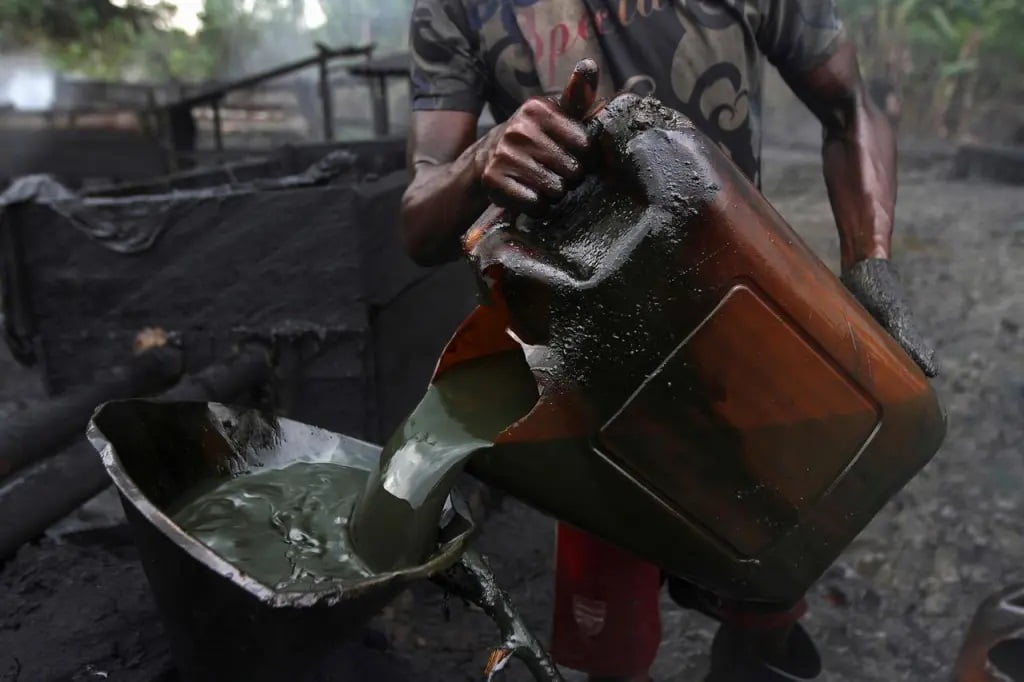 Critical takeholders have underscored the need to tackle illegal oil bunkering in the Niger Delta, lamenting that the country’s revenue is dwindling drastically due to the activities of oil thieves.

The stakeholders who spoke in separate interviews with the News Agency of Nigeria (NAN) in some of the South-South states, described oil theft as disastrous to Nigeria’s economy and environment.

They avocated the use of technology to track the movement of the stolen oil to foreign destinations, saying that the quantity taken to such countries constituted the major loss in Nigeria’s oil sector.

The respondents are of the opinion that Nigeria should collaborate with governments of the countries where the stolen crude is taken to, so as to effectively check the economic crime.

According to him, the nation is unable to quantify the amount of crude lost to illegal bunkering.

”There is artisanal crude theft and there is also industry level theft by international criminals with the support of local collaborators.

“There is urgent need to identify these unpatriotic local collaborators within the oil and gas industry, security agencies and other sectors and deal with them decisively.

”We can track the quantity of crude theft if we have the technology to detect where crude is being intercepted,” he said.

Bolton-Akpan, the Chief Executive Officer, Policy Alert, said that Nigeria’s export earning was 80 per cent dependent on oil, and interruptions in oil production and sales had affected the nation’s ability to deliver social services.

”The situation has created a twin revenue and debt crisis, worsened by the exchange rate challenge and deepening inflation.

”When oil facilities are compromised for theft the environment is polluted, social security is challenged and the affected communities become volatile,” he said.

He urged the Federal Government to strengthen cooperation with governments of the countries where Nigeria’s stolen crude is taken to, in order to check the crime .

”Some of the stolen crude is moved to foreign destinations for refining. An effective cooperation will expose the criminals.

”The country should also take the security of oil facilities seriously. We are not serious about securing our oil facilities,” he said.

Dr Goodnews Aniete, an environmentalist and public health advocate also based in Uyo, said the activities of illegal oil thieves did not affect only the economy.

Aniete said the activity had hugely threatened public health in the south-south due to the emission of carbons into the air, through illegal refining.

”In trying to illegally tap crude from pipelines, the oil thieves have spilled a large quantity thereby damaging the environment.

”In some communities, the flora and fauna have been damaged. Some species of aquatic lives have been exterminated.

”We should work as a people to tackle this monster. It does no good to the society,” he said.

He also urged government to deploy appropriate technology to monitor the amount of crude stolen from Nigeria and the countries they were taken to.

Aniete further stated that the greed of a few unpatriotic individuals should not override the need to protect public health.

He said that residents of communities where illegal oil refineries were located were at a huge risk of possible health challenge and should cooperate with security agencies to bring the perpetrators to book.

”The health implication may not become immediately manifest but the effect will surely come later in life,” he said.

However, the Nigeria and Security and Civil Defense Corps (NSCDC) says it employs tactics to effectively tackle oil theft and related crimes in the Niger Delta.
.
The Commandant of the corps in Akwa Ibom, Mr Suleiman Mafara, told NAN that the command had created strategic checkpoints to stop and search vehicles conveying petroleum products in the state.

Mafara said that to tackle those transporting illegally refined petroleum products, the command had ensured that only genuine products entered and left Akwa Ibom.

“Akwa Ibom is largely a transit state, the measure has proven effective in checking and curtailing the illegal activities.

“Vehicles, including trucks conveying petroleum products without authentic waybills from authorised depot’s and tank farms are impounded and suspects arrested,” he said.

He said that the command was synergising and collaborating with other critical stakeholders in the oil and gas industry as well as sister security agencies to tackle the crime.

Mafara said the Nigeria Union of Petroleum and Natural Gas Workers (NUPENG) and the Independent Petroleum Marketers Association of Nigeria (IPMAN), had helped the command to identify and arrest those conveying petroleum products with falsified documents.

“Our personnel work with IPMAN, DPR and NUPENG to verify genuine waybills, while bearers of falsified ones are arrested and their trucks impounded.

“Intelligence has played a major role in the corp’s arresting, bursting of illegal refineries and prevention of pipeline vandalism,” he said.

Mafara charged all field intelligence officers to intensify efforts and work with their informants to generate timely and actionable intelligence that would help combat the menace.

He said that prosecution and securing conviction of arrested oil thieves was expected to serve as a deterrent to potential criminals.

The comandant noted that the challenges of fighting oil theft and pipeline vandalism in Akwa Ibom differed from what obtained in other Niger Delta states.

“Over 85 per cent of the oil explored in Akwa Ibom is in the high sea which is mainly operated by ExxonMobil via QIT terminal.

“The corps has a lot of personnel within and around the facility offering 24-hour protection for the pipelines and operation generally,” he said.

He said NSCDC in Akwa Ibom was committed to fighting illegal oil bunkering which was inimical to the environment and economy.

The commandant said that the collateral implications of illegal oil bunkering on the society could not be quantified.

”We are prepared to play our roles. We urge the public to support us with reliable intelligence,” he added.

On his part, the Chairman, IPMAN, Rivers chapter, Mr Joseph Obele, also said in Port Harcourt that the country lost crude to illegal refiners who burst pipelines to access it.

He equally said greater quantity of crude was lost to international theives aided by corrupt officials in the oil and gas industry to steal the product.

Obele however expressed hope that speedy implementation of the Petroleum Industry Act (PIA) would help to check the trend.

Attributing oil theft in the Niger Delta to deprivation faced by the region, he urged the federal government to ensure speedy implementation of the PIA which appropriates 3 per cent equity to oil producing communities.

According to the IPMAN chairman, until indigenes of the region begin to own commensurate stakes in the oil and gas economy, the challenge of oil theft will linger.

The lecturer in the Department of Business and Entrepreneurship, Rivers State Polytechnique, said corrupt officials in the sector always remained silent whenever issues of oil theft was discussed.

According to him, the bulk of theft around the oil sector happens in cooperate offices.

He urged oil bearing communities to adequately support security agencies in their mandate to protect oil facilities and expose acts of sabotage in the industry.

In Etche community, Mr Charles Utong, a fisherman also said that crude oil theft had negatively impacted on fishing and other aquatic lives in the area thereby lowering the local economy.

He urged government to ensure adequate pipeline survivance and environmental implementation of conservation policies that would protect aquatic lives and sustain fishing livelihood.

Also, Mr Sam Etengung, a leader in the community, said there was need to stop illegal oil bunkering in the Niger Delta to improve the country’s revenue and protect the region’s environment.

“Government has a lot to do; oil producing communities and other stakeholders need to check oil theft.

“These youths have often alleged negligence by oil companies and lack of social infrastructure by government,” he said.

He also said that even the local women now chose to do illicit crude oil trade rather than conventional fishing and farming.

However, Mr Erastus Awortu, Chairman, Andoni Local Government Area of the state has commended Rivers government for its efforts to ending illegal oil bunkery in the state.

He said that the state government, through the supervision of the security agencies and local government chairmen, had stepped up actions towards ending the crime.