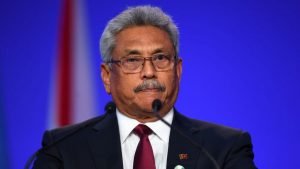 Fresh protests are under way in Sri Lanka demanding the resignation of Prime Minister Ranil Wickremesinghe.

The protest happened hours after Sri Lanka’s embattled President, Gotabaya Rajapaksa and his wife fled the country to Maldives on a military flight early on Wednesday.

More than 3,000 protesters were outside the prime minister’s office in Colombo, near the premier’s residence, which was burnt down on Saturday, and near the state-run television and radio station.

The prime minister’s office said he was considering declaring a curfew and a state of emergency, but would not be able to do so until being sworn in as acting president.

However, Police were seen  firing tear gas to push the protesters back, but they were resisting.

Earlier, Sri Lanka’s Air Force confirmed in a statement that they had provided an aircraft for the president’s departure after receiving approval from the Ministry of Defence.

Airport sources in Maldives have confirmed that Rajapaksa landed in the capital Malé and was transferred to an undisclosed location.

Rajapaksa is expected to step down following months of protests in Sri Lanka over his failure to address an unprecedented economic crisis in the island nation.

He officially notified Sri Lankan Parliamentary Speaker, Mahinda Yapa Abeywardena of his intention to resign on Wednesday, but  yet his letter of resignation has not been received.

Rajapaksa began a five-year term in office in November 2019.

Hundreds of protesters in Colombo have continued to occupy the president’s official residence as well as well as that of the prime minister after both buildings were stormed by protesters on Saturday.

Police said the occupiers have caused damage at both residences and removed items including laptops and cameras.

The president’s resignation will pave the way for Wickremesinghe to be sworn in as acting president until a vote is held among the 225 members of parliament on July 20 to elect a new head of state.

However, anti-government protesters are opposed to the elevation of Wickremesinghe to the presidency, considering him an ally of Rajapaksa, and have called for his resignation.

If he does not step down, protesters have threatened to call for a general strike and further protests from Thursday.

Wickremesinghe, earlier announced he was willing to leave his post if a government of national unity including all political parties was formed, but he is now likely to stand as a presidential candidate in the July elections as he retains the support of some ruling party lawmakers in parliament.

Wickremesinghe was chosen by Rajapaksa to become prime minister when his predecessor resigned on May 9.

Meanwhile, Sri Lanka continues to face a severe fuel shortage with long queues for petrol and diesel in evidence across the country.

Sri Lanka has sought a bailout from the International Monetary Fund (IMF), but the IMF is demanding political stability as a prerequisite to any release of funds.