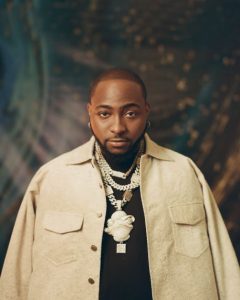 Phiona Okumu, Spotify’s head of music for sub-Saharan Africa, in a statement on Friday said this was coming ahead of July 17 when Davido’s debut album would be 10 years.

Okumu said that spotify in awe of the music star, decided to share some of the details behind his iconic debut album, “Omo Baba Olowo: The Genesis”.

“His decade-long career has seen him go from an emerging pop star to a global icon, with an unending list of hits and cross-continental collaborations.

Okumu said that the 17-track album, released in 2012, was now considered one of the groundbreaking projects that lit the path for modern African music.

She said this inspired a new era of young African musicians that were taking over the world today.

“The Yoruba-language album title means “The child of a wealthy father” and alludes to his father’s affluence.

“Davido, now one of Africa’s top earners in music, has stepped out of his father’s shadow and crafted a story for himself, having built his own wealth and followers that span the globe,” she said.

According to her, Davido has become more than an artiste but also a tastemaker who has driven a number of budding African artistes to mainstream stardom by either offering free verses or co-signing them via his independent label, Davido Music Worldwide (DMW).