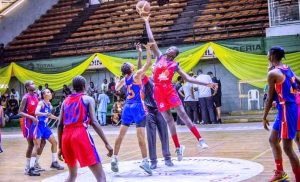 The Federal Ministry of Youth and Sports Development says it will commence the Under-18 basketball championships from July 27 to 30 with a view to ensuring more youth participation in the sport.

Mr Mohammed Manga, Director, Press and Public Relations in the ministry, made this known in a statement on Tuesday in Abuja.

“The committee was charged to commence a youth basketball league and domestic league to help in nurturing home-based players so as to provide a reservoir of players.

“The players will represent the country in international events after the period of withdrawal.

“The committee has adjusted the date for the U-18 basketball championships, initially slated to commence from June 15 to July 27 through 30, while the finals will come up from August 8-14, 2023,’’ he said.

This is to afford the committee ample opportunity to study, rethink and restructure the logistics and organizational arrangements.

According to him, the shift will enable the committee to ensure that states are adequately informed and prepared for full participation.

“To this end, top athletes and outstanding coaches selected from the championships will form the core of the National U-18 teams.

“They will be camped between August 14 and 21 ahead of subsequent developmental programmes aimed at supporting the grassroots development policy for the game being finalized,” he said.

Manga said that the committee would be organizing clinics for coaches, referees, match commissioners and table officials clinics from July 3 – 5.

He said the clinic would have special sessions for young coaches and referees expected to play crucial role in the grassroots development of the game.

According to him, the clinic will prepare officials generally for the premier league.

He said that the women leagues dates would be announced after due consultation with relevant stakeholders as well as the ministry.

“The committee invites all basketball stakeholders to join hands with the committee at this crucial moment towards the re-engineering of the sport,’’ Manga said.

According to basketball stakeholders, the latest move by the ministry has come in handy especially after the recent ban on Nigerian basketball by the government.

Recently, stakeholders in Nigeria expressed shock over the suspension of basketball in the country, describing the action as an ‘overkill.’

Respondents, reacting to the news of the suspension, noted that the decision will only worsen the state of basketball in Nigeria.

Reports say that President Muhammadu Buhari recently approved the immediate withdrawal of Nigeria from all international basketball competitions for a period of two years with immediate effect.

Sunday Dare, the Minister of Youth and Sports Development, disclosed this while briefing newsmen recently in Abuja.

Dare, represented by Ismaila Abubakar, the Permanent Secretary of the Ministry, said a committee would be set up to oversee basketball leagues in the country.

“Following the unending crisis which have plagued and nearly crippled the development of basketball in Nigeria, President Buhari has approved the withdrawal of Nigeria from all international basketball competitions for a period of two years.,” he said.

“This is with immediate effect,” he said, adding that the withdrawal of Nigeria is in order to concentrate efforts by government towards revamping the sport from the grassroots as well as domestic leagues which have become moribund.

According to a Coach, Alabi Adelanwa, who is also one of the pioneer members of basketball in Nigeria, “The decision by the federal government to suspend basketball in Nigeria is uncalled for, questioning “What leadership crisis are they referring to when the world basketball ruling body had ratified the election of the Nigeria Basketball Federation in Benin?

“To say there is leadership crisis is just in their imagination and the decision to suspend basketball will further worsen an already bad situation due to the inaction of the Federal Ministry of Youth and Sports Development.

Adelanwa, who is also the first FIBA licensed referee in Nigeria lamented the actions of government, explained “so, what do you tell the players that have labored to qualify for the FIBA Women’s Basketball World Cup in Australia or even the men’s national team that in the FIBA World Cup qualifiers due next month, are they not carrying Nigerian passports. We need to think properly before making decisions. Nigeria as a member of the Olympic charter, decisions are not just taken for the sake of it,” the first FIBA licensed referee in Nigeria stated.

Similarly, Professor Adamu Ahmed, a former member of the NBBF in his reaction, noted that it’s a shame that the situation in basketball has degenerated to attract such a decision by government.

He said: “Some level of maturity should have come to play in all of this. I don’t understand why we have allowed it to reach this level after all the efforts by former President of the NBBF, Gyang Buba who ensured that everyone was included for peace to reign.”

Coach Mike Akuboh, a scout with the Toronto Raptors, says that the Sports Ministry has just exercised their power but noted that like everything, this will pass.

“The result of this action is a calculated attempt to further kill the game. There’s nothing more to say than that those who see themselves as gods will not be relevant as we have seen with many big players in Nigerian politics,” he noted.