The farmers said that in spite of the subsidy on fertilizers by the Federal Government, they were still buying the product from the open markets at exorbitant prices. 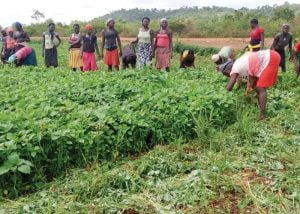 Farmers in the South-East geopolitical zone have urged the Federal Government to supply subsidised fertilizers and other farm inputs directly to their associations to end the unwholesome activities of middlemen in the region.

They made the plea in separate interviews with the News Agency of Nigeria (NAN) on Monday, while reacting to the activities of middlemen in the distribution of agriculture inputs, especially fertilizers.

The farmers said that in spite of the subsidy on fertilizers by the Federal Government, they were still buying the product from the open markets at exorbitant prices.

Commenting, Prof. Charles Asadu of the Department of Soil Science, University of Nigeria Nsukka (UNN), said that middlemen were making it difficult for real farmers to access the government subsidised fertilizers.

Asadu, who is the South-East Coordinator, Nigeria Institute of Soil Science (NISS), said it was painful that majority of farmers were buying fertilizers from the open markets at exorbitant prices, because they have no access to the subsidised fertilizers.

“The problem is that the middlemen allow those I call ‘political farmers’ to come and buy fertilizers at cheap prices and then, resell them at high price to traders in the open markets.

“Middlemen and this political farmers are making brisk businesses yearly from the government subsidised fertilizers and farm inputs meant for farmers in the country,” he said.

The coordinator said that high cost of fertilizers was one of the reasons responsible for hike in prices of food items in the market.

“So, a farmer will add the cost of fertilizer to determine how much to sell harvested food items.

“For the prices of food items and vegetables to come down, government should put measures in place that will ensure that farmers have access to subsidised fertilizers,” he said.

The agriculture expert said that one of the ways government could solve the unwholesome activities of middlemen was to supply fertilizers and other subsidised farm inputs directly to the farmers associations.

“Government can also build warehouses in Faculties of Agriculture in tertiary institutions in the country as a point of sale for subsidised fertilizers to farmers, so that sales will be supervised and monitored by the faculty,” he said.

Also, Mr Victor Eze, a cassava famer, alleged that middlemen were using the government subsidised fertilizers to enrich themselves as they were selling the product to traders in open markets at high cost.

“Since I started farming in 2013, I have not benefited from the so-called government subsidised fertilizers; each time you go to their offices to buy, they will tell you that it has finished.

“If government wants to achieve food security, as well as bring down the high cost of food items in the market, it should eliminate middlemen and supply subsidised fertilizers and farm inputs directly to farm associations in the country,” Eze said.

In Imo, the state Commissioner for Agriculture, Dr Berth Okorochukwu, said that the delay by the Federal Government to disburse subsidized fertilizers to state government was the reason why farmers were buying fertilizers at exorbitant rates.

Okorochukwu said till date, the state Ministry of Agriculture has yet to take delivery of the Federal Government subsidized fertilizers.

He said: “I have been in contact with the Federal Ministry of Agriculture. They have not given us any and that is what has led to the high cost of fertilizers in the market.”

Okorochukwu, however, said that middlemen were selling fertilizers at exorbitant price because they also bought at a higher rate.

The commissioner said as soon as the ministry took delivery of the subsidized fertilizers, it would be distributed to farmers at a subsidized rate.

“I have scheduled with the state Chairman of All Farmers Association, as soon as we receive the fertilizers, I will contact him immediately for distribution,” he said.

Meanwhile, some farmers in the state have urged the three tiers of government to distribute farm inputs directly to the targeted beneficiaries rather than through middlemen.

Mrs Udoka Chibuzor, a Poultry Farmer, said this would make for faster access to inputs as well as ensure timely production of agricultural products.

On his part, Mr Chukwudi Patrick, a small scale cucumber farmer, decried what he described as “unnecessary difficulty” in accessing inputs through the middlemen.

Patrick, while commending the Federal Government for providing virile seeds for cucumber farmers in some parts of the country, however, said that some of the seeds had almost gone bad by the time the farmers could access them.

He, therefore, urged the Federal Government to work out the modalities for direct access to beneficiaries of farm inputs rather than through middlemen.

Also, Mr Alphonsus Chimezie, a rice farmer, said that some uninformed farmers had blamed government for the inflated costs of inputs, a situation, which he said, was presenting the government in bad light.

Also, Mr Romanus Eze, the Chairman, All Farmers Association of Nigeria (AFAN), Enugu State Chapter, said that many farmers in the state had never benefitted from the government’s subsidised agricultural inputs.

“We do not know if there are Federal Government subsidised fertilizers, because we farmers in Enugu have not seen or received any.

“Most of the inputs from the Federal Ministry of Agriculture do not get to the end users, because we, the organised farmers, are not being informed and involved.

“The Ministry officials make use of politicians at the local government areas of the state, who always share the inputs to their relatives and the rest becomes history,” Eze said.

Amanze said the initiative would help to boost productivity in agriculture and enhance food security in the state.

“We are presently making arrangements to source fertiliser for farmers from different areas.

“We shall sell them at a price that will be a little less than what they will get from the open market,” Amanze said.

According to him, the initiative will serve as a platform to bring standard and quality fertilizers within the reach of farmers, especially those practicing subsistence farming.

The ADP manager said that middlemen were not entirely the cause of the exorbitant price of the commodity.

He said that middlemen were also purchasing the commodity at a high price and needed to cover the cost, plus their profit.

Amanze said that the Federal Government, through the Presidential Fertilizers Initiative, subsidised the production of fertilizers in the country.

He said that the subsidy helped to stabilise the price of fertilizer between N7,000 and N9,500 per bag.

Amanze, however, regretted that the recent global price hike seemed to have eroded the effect of the subsidy.

He described the situation as worrisome and called for urgent action by the government.

“Everybody is appealing for Federal Government’s immediate intervention to force down the price of the commodity.

“We must also realise that Russia and Ukraine, where we get some of the major raw materials for fertiliser production, are locked up in a war.

“This is largely the major factor for the present skyrocketing price of the commodity,” he further said.

Commenting, Mr Samson Oguntoye, the Notore Chemical Industries Plc, Regional Manager, South, for Agronomy and Extension Services in Abia, expressed concern over the cost of fertilizer and other farm inputs.

Onwuasoanya said that quick distribution of the fertiliser and other agro inputs would reduce the trend of continuous rise in price of the inputs.

The programme manager also attributed the rise in prices of fertiliser and other agro inputs to the ongoing war between Ukraine and Russia.

He said that most of the inputs and raw materials were being imported from Asian countries, including Ukraine and Russia.

The programme manager said that it was only when the government supplied the subsidised fertiliser that the price would come down.

He encouraged farmers to embark on resource management where farmers might have to reduce the quantity of fertiliser because of the high cost.

According to him, resource management is the “in” thing now.

Mr Ezekiel Igboji, the Coordinator, Organic Association of Nigeria, Ebonyi branch, called on the authorities in charge to identify real farmers for proper distribution when the Federal Government supplied fertiliser.

Igboji said that the items were mostly distributed to those who were not farmers because of preference interest.

Also, Mrs Celine Okpor, a farmer, said she had to share a bag of fertiliser with four people due to its high cost.

Another farmer, Mr Christian Uguru, said that prices of farm production like fertilizer, seed and pesticides, energy, machinery and land, pushed farmers further away from breaking even.

“When it costs more to keep their operation going, they end up spending a larger share of their working capital on input costs, while experiencing a lower profit.

“There are ways to mitigate negative effects by monitoring operational performance, considering area for improvement.

“For those who cannot afford a bag of fertiliser, we sell in paint container between N3, 000 and N3, 500, depending on the brand,” Uguru said.

In his remarks, Mr Jude Nwankwo, Programme Manager, Agriculture Development Programme in Anambra, said it is currently encouraging farmers to adopt regenerative method in providing manure to their crops.

Nwankwo said that there was less emphasis on the use of conventional fertilizers now in the state due to its side effects on the soil.

“We uncovered that when you use conventional fertilizers, you will get bumper harvest, but this often results to killing of the soil.

“But, if you use the regenerative method, you will get optimal harvest and the soil will remain in better state,” he said.

Nwankwo, however, said that Anambra was still actively involved in the agro inputs distribution for farmers to enable them to benefit from Federal Government policies.

He said input such as NPK fertilizer was subsidised by 30 per cent by the state government, adding that farmers accessed them via some designated agro inputs dealers at N6,500 per 50kg bag.

Nwankwo explained that the regenerative method could be likened to organic fertilizer, saying it was mere application of natural manures to crops.

He said that middlemen were no longer involved in the distribution of agricultural inputs, as Federal Government recently prevented them from participation in the process of distribution.

“Before now, middlemen were playing roles, but the Federal Government recently shelved them by authorising importers with the capacity to import and distribute agricultural inputs to take over.

“All what is obtainable now is that inputs including fertilizers are sourced in the open markets; though, in Anambra, we have selected agro dealers who sell to recognised farmers at subsidised price,” he said.