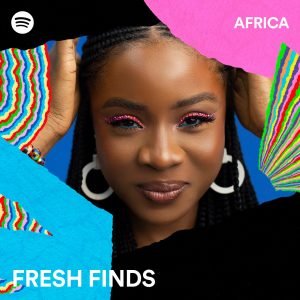 Phiona Okumu, Spotify’s head of music for sub-Saharan Africa, disclosed this in a statement on Wednesday in Lagos.

She said the programme was built around the eponymous playlist and access to tools and initiatives that inspired artistes to have long and thriving careers.

Inspired by her recent wins, Preyé is thrilled by the opportunity to reach even more fans as she said: “I still celebrate every single playlist addition, so being highlighted as Spotify’s Fresh Finds artiste of the month truly feels amazing.

“I am excited by the opportunity to share my music and story with new listeners, especially all my fellow R&B lovers.”

Born in Lagos, Preyé Itams grew up inspired by her father’s music library and the music he would play while working; the traditional sounds of Jazz, Soul, and melodic bards like Jill Scott, Enya, Brenda Fassie, and Lauryn Hill.

Her first release in 2015,  ‘Mortia‘,  introduced her as an exciting voice in the emerging independent alte community.

In 2018, she collaborated with two vanguards of that scene, Tay Iwar & Santi on Space, introducing more fans to her soothing poetic take on songwriting.

After quitting a rigid job in Canada to focus on her music, Preyé staked her claim with defiant soulful tunes including Peace Of Mind and Red Wine.

The vulnerable yet unyielding essence of Preyé’s music and her dynamic vocals have earned her editorial and fan attention.

In June this year, Billboard listed her hot single, Malibu, as one of their top R&B finds.

Her September-released debut EP, ‘Don’t Look Down‘, centers around love and self-discovery and features Nigerian rapper LADIPOE on the lead single, Love, Today.

It is an important aspect of Spotify’s initiatives, including RADAR & EQUAL, created to support the African music scene.