According to him, destroying the substandard products is to assure Nigerians that SON is actually destroying them after obtaining court order to that effect. 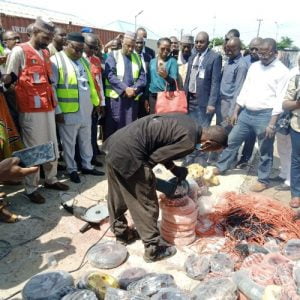 Mallam Farouk Salim, Director General of SON, noted while destroying the substandard products that they affected the nation’s economy negatively.

Salim said all the products destroyed were imported into the country and smuggled through the ports.

He, therefore, called for the return of SON to the ports to help minimise the damage done by substandard products to the nation’s economy.

According to him, destroying the substandard products is to assure Nigerians that SON is actually destroying them after obtaining court order to that effect.

“Most of these substandard products were captured in the market where they are ready to be sold to customers and the unfortunate thing is that they passed through our ports.

“It will be much easier for these substandard products to be detected if our employees are at the source of the import of these products,” he said.

“I guarantee you that if our officers have opportunity to inspect these products, the moment they look at it from experience, they will be able to detect the substandard goods.

“Don’t forget that officers of the customs service are trained to check for duty, they have no idea of how to detect substandard products easily, and our personnel are trained on how to check these products,” he said.

The SON boss said unfortunately its officers had no unfettered access as stipulated by the constitution.

“Unless the law is changed by the National Assembly, signed by the president, the law says SON must and should be at the port, not at the discretion of any organisation,” he said.

He said SON had made arrests, like the person in the Auto Spare Parts and Machinery Dealers Association (ASPAMDA) producing fake lubrication fluid, presently in jail to be taken to court soon.

“We appreciate SON for ensuring that substandard products don’t enter the market, but we are particular about what happens to these things after the destruction.

“We understand that most of them are going to recycling companies and the only one not recyclable for now is the oil and we will link SON with a facility that can help them dispose it so that there will be zero waste.

“The disposal process here is in line with our rules and regulations. The first thing is to dismantle and seperate them, which they have already done, next is the recycling,” she said.

Also, Mrs Susie Onwuka, Head Federal Competition and Consumption Protection Commission (FCCPC), Lagos Office, said the commission had a Memorandum of Understanding with SON and different sector regulators on removal of substandard goods from the market.

She commended SON for the massive seizures, noting that more work needed to be done.

Assistant Commissioner of Police, Force Criminal Investigation and Intelligence Department, Annex, Alagbon, Lagos, Mr Lawrence Iwodi, said the police was working with SON to ensure that standard was met in relations to goods imported into the country.

“SON has often referred cases of substandard goods to the Nigerian Police and we have carried out a number of investigations into these cases, we have a lot of convictions, some are still ongoing in the court and still under investigation,” he said.

Mrs Bukola Adubi, Chief Operating Officer, MisCom Cables and Wires Ltd., promised that going forward, the company would have a good relationship with SON so that more of this evil would be exposed.

“My visit here today has been eye opening and we have been in discussion with SON on this issue. This issue is affecting our legacy, brand and our botttmline.

“This menace given sometime, we will see an end to it and I will go back to tell my people that SON does actually have their back,” she said.