A businessman Mr Charles Akav, said that the crisis was becoming worrisome as it had been fluctuating since the beginning of the year. 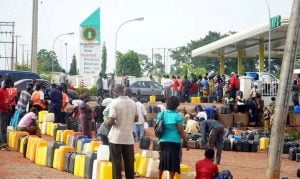 Some residents of the Federal Capital Territory (FCT), have called for permanent solution to the perennial fuel crisis that has bedeviled the nation’s capital in the last four months.

The News Agency of Nigeria (NAN) reports that the situation had resulted to long queues of vehicles at various fuelling stations.

A NAN correspondent who monitored some fuelling stations at Wuse, Gwarimpa, Wuye and Kubwa areas of the FCT, reports that most of them were not selling.

A businessman Mr Charles Akav, said that the crisis was becoming worrisome as it had been fluctuating since the beginning of the year.

He called on the government to provide a permanent solution to the situation, adding that the hardship was too much on the citizens.

“This development is affecting everything including food stuff, transportation and other products and services”.

Akav also called on the Nigerian Upstream, Midstream and Downstream Petroleum Regulatory Authority and Manufacturers Association of Nigeria (MAN) to check the activities of fuelling stations, to prevent hoarding and black marketing.

A taxi driver, Aminu Adamu said he had been at the fuelling station since 7 a.m. and was yet to buy fuel as at 1p.m.

“This has affected my daily returns because I will only work for few hours and I am expected to give returns to the owner of the car and feed my family.

“The hardship is too much and we cannot go back to farming as we are scared of bandits or being kidnapped,” Adamu said.

Miss Amaka Emmanuel, a trader urged the government to look into the alleged fuel diversion to neighbouring countries.

According to her, government should not focus only on the forth coming general elections, but also the general well-being of the citizens.