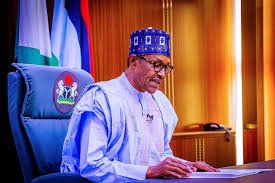 President Muhammadu Buhari, in the course of the week, directed the National Agency for Science and Engineering Infrastructure (NASENI) to produce more solar cells to boost the alternative power sources in the country.

Chief Executive Officer of NASENI, Prof. Mohammed Haruna made this known to State House correspondents after briefing the president on the activities of the Agency on Friday in Abuja.

The News Agency of Nigeria (NAN) reports that the president gave the directive when the Chief Executive Officer of NASENI, Prof. Mohammed Haruna, updated him on the activities of the Agency on Friday in Abuja.

President Buhari is the Chairman of NASENI.

According to Haruna, the president also directed the implementation of modular irrigation project and the production of more farm implements, to boost agricultural activities.

Speaking at the event, Buhari expressed the hope that the rapid integration of solar power into the country’s energy mix woujd  lead to an increase in electricity access to underserved and unserved communities.

According to him, the Federal Government has embarked on several reforms aimed at revitalizing Nigeria’s energy sector aimed at improving energy access to communities across the country.

He commended the interest of the U.S. developer to invest in Nigeria’s power sector.

He pledged that the Federal Government would remain committed to collaborating with the private sector in improving energy access, creating jobs and industrial development.

The president highlighted some of the reforms embarked upon by this administration to address Nigeria’s energy needs.

Earlier in the week, the president received Letters of Credence of Canadian High Commissioner to Nigeria, Amb. James Christoff and Ambassador of Mexico to Nigeria, Juan  Oritz, on Tuesday in Abuja.

At the event, Buhari commended collective efforts of nations towards tackling security challenges across the globe, and within Nigeria, urging more collaboration to check terrorism, banditry and insurgency.

The Nigerian leader told the diplomats that successes in taming insecurity had been recorded through collaboration across borders, and more could be achieved.

President Buhari, on Aug. 3, administered the Oath of Allegiance and the Oath of Office on three new Permanent Secretaries of the Federal Civil Service.

NAN reports that the Permanent Secretaries include Lydia Jafiya from Adamawa; Udom Okokon Ekenam from Akwa Ibom and Farouk  Yabo from Sokoto State.

The president performed the ceremony shortly before the commencement of the weekly virtual meeting of the Federal Executive Council (FEC), at the Council Chambers of the presidential villa, Abuja.

The FEC meeting approved 2.59 billion dollars for the development of Badagry Deep Seaport in Lagos State.

The council also approved N2.6 billion for the procurement of utility vehicles and gadgets for security agencies operating in the Federal Capital Territory (FCT), Abuja.

The presentation was made at the State House Abuja on Thursday.

The News Agency of Nigeria (NAN) reports that the chairman also introduced the party’s presidential campaign spokesperson, Mr  Festus Keyamo to the president.

The president also congratulated two of his aides, Sarki Abba and Amb. Lawal Kazaure, on being conferred with the highest civilian national honours of Niger Republic.

Abba is the President’s Senior Special Assistant on Household and Domestic Matters while Kazaure is the State Chief of Protocol.

Also during the week under review, President Buhari joined the entertainment industry, particularly artistes and musicians, in commiserating with ace instrumentalist, singer and song writer, Bongos Ikwue, who lost his wife, Josephine Ifeyinwa, 73.

He also joined family, friends and associates in mourning the death of former Inspector-General of Police (IGP), Mustapha Balogun.

President Buhari had sent condolences to family, friends and associates of Prof. Akin Mabogunje, who passed on at 90.

Buhari declared that Mabogunje’s “departure will be greatly felt by the nation, especially the academia”.

President Buhari also condoled with former Head of State, Gen. Yakubu Gowon, over the demise of his elder sister, Mrs Maryamu Dimka, who died on Wednesday.

Maryamu was the wife of Late Commissioner of Police, Mr S.K. Dimka, and survived by children including Mrs Elizabeth Rimdans, one time Resident Electoral Commissioner in Anambra and Bauchi State.