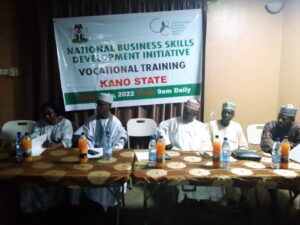 The Small and Medium Enterprises Development Agency of Nigeria (SMEDAN) has begun training of 90 persons in Kano on entrepreneurship skills.
The News Agency of Nigeria (NAN) reports that the training is under its National Business Skills Development Initiative (NBSDI) and lasts for five days.
Mr Olawale Fasanya, Director-General, SMEDAN, at the official opening of the training on Monday in Kano said the programme was being implemented in the 36 states and Federal Capital Territory (FCT) to spur entrepreneurship.
Fasanya , represented by Mrs Funto Babarinde, Chief Enterprise Officer, SMEDAN, listed fashion and designing, Catering, hairdressing and make-up as the trades to be learnt by the beneficiaries.
According to the Director-General, a total of 3,330 entrepreneurs would be impacted with entrepreneurship and vocational skills and empowerment materials nationwide at the rate of 90 per state including FCT.
He said it was in the bid to support the MSMEs in the most practical way that the agency developed the NBSDI to fill the capacity gap of the youth by enhancing their engagement in productive ventures.
“The NBSDI enhances youth engagement in productive ventures, thereby ensuring they earn income through filling the artisanal gap in Nigeria,” the DG said.
Fasanya said that after the training, the participants would be empowered with equipment and materials to start their chosen businesses or improve them.
MSMEs account for the majority of the enterprises in Nigeria and the highest number of jobs created in the economy.
The state Commissioner for Commerce, Alhaji Ibrahim Mukhtar, urged the participants to develop a passion for the vocation they chose to learn.
Mukhtar said the training was coming at a time when Gov. Abdullahi Ganduje had lined up many programs and policies to create jobs.
According to him, the entrepreneurs will be employers of labour, rather than employees.
One of the beneficiaries, Amina Sani, lauded SMEDAN for exposing them to modern skills.
She urged the government to patronize their various businesses to enable them to succeed.
(NAN)
Sign in
Welcome! Log into your account
Forgot your password? Get help
Password recovery
Recover your password
A password will be e-mailed to you.